ABC General Hospital spoilers and updates reveal Jocelyn Jacks (Eden McCoy) has set her sites on Cameron Webber (William Lipton). However, Cameron is torn between Jocelyn and Trina Robinson (Sydney Mikayla). Where will this moment of indecision leave the teens?

General Hospital’s Jocelyn has taken some time to come to this decision but now she wants Cameron. Dev Cerci (Ashton Arbab) wants Jocelyn. However, Jocelyn’s attitude enforces Dev’s assumption that she just wants to be friends. Dev is trying to convince Cameron that he has to tell the girls he wants to be friends with both of them so one of them doesn’t get hurt. Unfortunately, the girls may push that themselves forcing him to make a decision.

General Hospital’s Trina has been into Cameron since they kissed months ago. However, Cameron and Tina have danced around their union but never committed Now that Trina wants to take a chance, Jocelyn has thrown a monkey wrench into her plan. Trina is bound to be upset that Jocelyn has decided that she want to be with Cameron. Trina told Jocelyn about the kiss she and Cameron shared. If Jocelyn were a true friend, she would know that Trina wants to be with Cameron. However, Trina should be honest about her feelings as well. Trina needs to tell Jocelyn that she feels more than friendship toward Cameron and go from there. 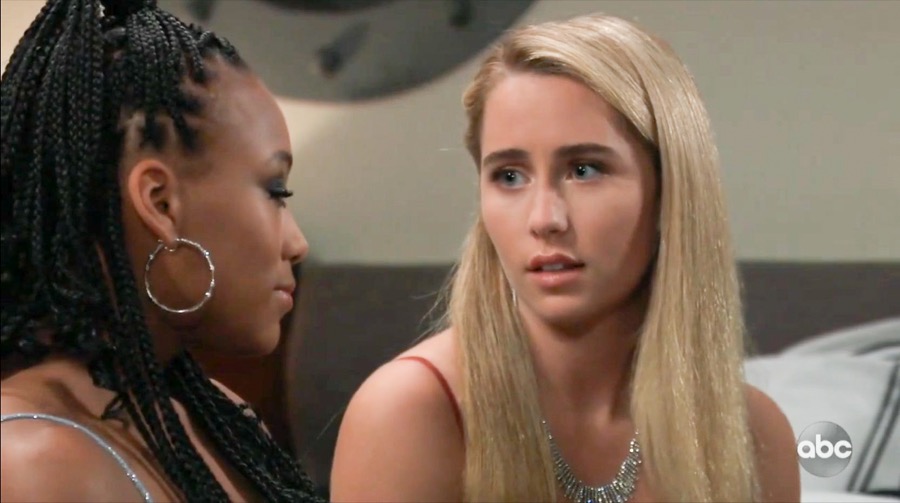 GH Spoilers – How Will This Affect The Girls?

If Cameron chooses Jocelyn it is going to hurt Trina because she leans on Cameron when she needs someone much more than she does Jocelyn. Cameron and Trina went through a traumatic time together. Cyrus Renault’s (Jeff Kober) men almost killed them and Trina believes her father was killed by these men. Trina trusts Cameron. Trina relies on Cameron. Losing Cameron could certainly hurt Trina. Trina could also have problems with Jocelyn. Jocelyn has a dad and a stepdad. Jocelyn has her sisters and her brother.

And Trina only has her mother because her father is hiding out. Trina may feel that Jocelyn is taking the one person she can lean on away from her. Trina could also be upset with Jocelyn for taking the one guy she could see as a boyfriend. If Cameron chooses Trina instead, Jocelyn could be very upset with her as well. Will an argument over a boy end their friendship?

Jocelyn and Trina may be friends, but the opposite Sex has ruined a lot of friendships, could this be another one of those cases?