ABC General Hospital spoilers reveal that alum Tamara Braun (Kim Nero) is a major Schitt’s Creek fan. The beautiful and talented actress has joined the cast of Days of our Lives and is set reprise her role as Ava Vitali.

In the meantime, she’s taken time to show some love on her Instagram to the hilarious mega-hit which recently swept the Emmy Awards.

She posted a clip from the show that reveals Moira Rose, played by Catherine O’Hara, in her soap Sunrise Bay and captioned it, “I didn’t have a slap anyone today but I had a long dramatic look away from my costar while I was being spoken to. Oh, Moira how I love you so. I would say I’m going to miss the Roses and all their wonderful insanity but I won’t because I’ll just keep watching the seasons over and over and over again. Thank you @schittscreek for continuously making me 😂 and 😭. And thank you for the #happyending #bebes #love #laughter #heart #schittscreek #moira #alexis.”

Schitt’s Creek swept the categories it was nominated in including Outstanding Lead Actress in a Comedy for O’Hara.

Braun’s fans seem to love the funny show as much as she does with one writing, “We just started watching. What a godsend! Rationing our precious few remaining episodes 😔,” and another posting, “Omg me too I just watched season six over the weekend and I’m starting all over again because I just absolutely love this show!”

One fan had this helpful hint, “When you watch it over again you’ll start to pick up on stuff that you didn’t see the first time! I’m on my second round and there are a bunch of little comments about Gwen that make way more sense & are way funnier now. 😂.” 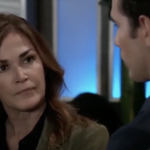 One fan showed Braun the love writing, “Nothing but love to you and many blessings. Really appreciate how loving and caring you are. Your honesty is so admirable. Always sending love and positive energy to you. Thank you for being such a good-hearted human being ♥️🙏.”

After leaving her role as embattled Kim Nero on GH Braun will once again appear as evildoer Ava Vitali on Days of our Lives. Did we mention Ava has come back from the dead?! What would Moira Rose have to say about that?!