ABC General Hospital news and updates reveal Harrison Chase’s (Josh Swickard) mom has been a sore spot in Hamilton Finn (Michael Easton) life for years. Chase’s mom has finally come to Port Charles and she is none other than Jackie Templeton (Kim Delaney). How does Josh feel about Kim playing his mom?

General Hospital’s Swickard stated that a few weeks ago he saw Kim on the set and wondered who she was playing. To Swickard’s surprise, he learned that Jackie was playing none other than his mother. Josh says he and Jackie sat down and go to know each other. Josh said they hit it off and their first scenes came across as a mother and son. Their second scene worked great as well. Josh and Kim seem to think this mother and son relationship will work out very well. Josh said Kim’s voice sounded familiar so he looked up who she was and feels lucky to be working with Kim.

General Hospital writers haven’t released a great deal about the relationship between Finn and his stepmother. It seems that Michael, nor Josh weren’t given much background information either. Now that Jackie is in town, it gives the writers room to open up about Finn and Chase and why Finn doesn’t like his stepmother. How much of the backstory will we get? We now know why Finn has a different last name thanks to Jackie’s arrival. We also know that Chase is tied to decades of stories because of his mother’s identity. Is there another reason why Finn wants to hate Chase but can’t? 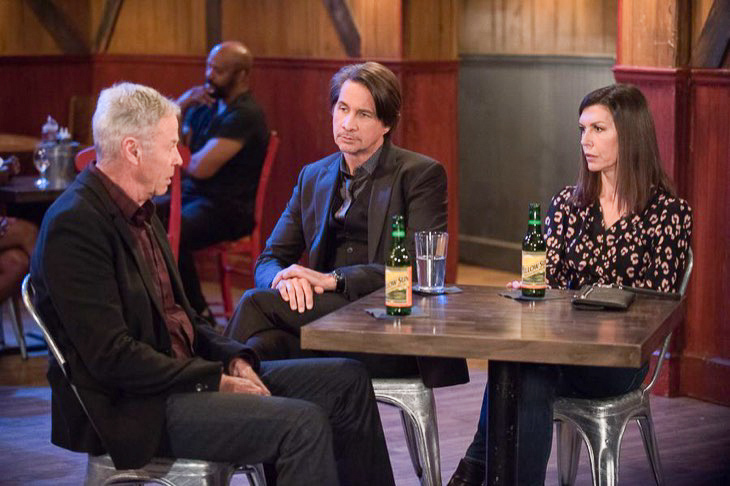 How does Chase feel about his mother’s connection to the legendary Robert Scorpio (Tristan Rogers)? Chase seemed to be shocked that his mother knew the famous spy. Learning that his mom also knew Lulu Spencer’s (Emme Rylan) father may be a shock as well. However, knowing that his mother dated a famous spy at one time is a very different life than what her mother has had with his father. What else might Chase learn now that his mother has returned to her old stomping grounds?

How will Chase take learning that his mother is investigating drug king pen, Cyrus Renault (Jeff Kober)? Chase is a cop but can he protect his mother from Cyrus? Could Jackie also get tied up in the mess of luring Alex Marick (Finola Hughes) back to town? With everything going on in Port Charles right now, Jackie could easily get caught in a crossfire, will Jackie survive her return to Port Charles? Will Chase’s mom die while on her visit?