General Hospital (GH) star Josh Swickard is a Fourth of July baby and turns 29 today as the nation celebrates its own birthday. Learn five fast facts about the actor who was born on July 4, 1992.

Josh Swickard began his career as a model when he was still in his teens when he signed with Wilhelmina modeling agency. However, he originally wanted to be an accountant and studied accounting in college for two years before modeling came into his life. After modeling for six years, he finally started landing acting roles.

When Chase falsely learned this year that Finn (Michael Easton) was his father and not Gregory (Gregory Harrison), Swickard understood what his character was going through, telling TV Insider the following: “Ever since Chase came onto the scene three years ago, he’s had this strong desire for family. Chase still doesn’t know how to feel about it and who to be angry with.”

Then it’s a good thing Chase doesn’t have to be angry anymore — at least at his family. It turns out Gregory is his father, after all. Now let’s see how he’ll soon feel about Michael (Chad Duell) and Willow (Katelyn MacMullen).

Josh Swickard Was Trending On Netflix

In December of 2020, Swickard starred in the Netflix original film called A California Christmas, which became one of its most popular films of the season and was trending in December. In fact, it was Swickard’s wife, Lauren, who wrote the script and she starred with him in the film. 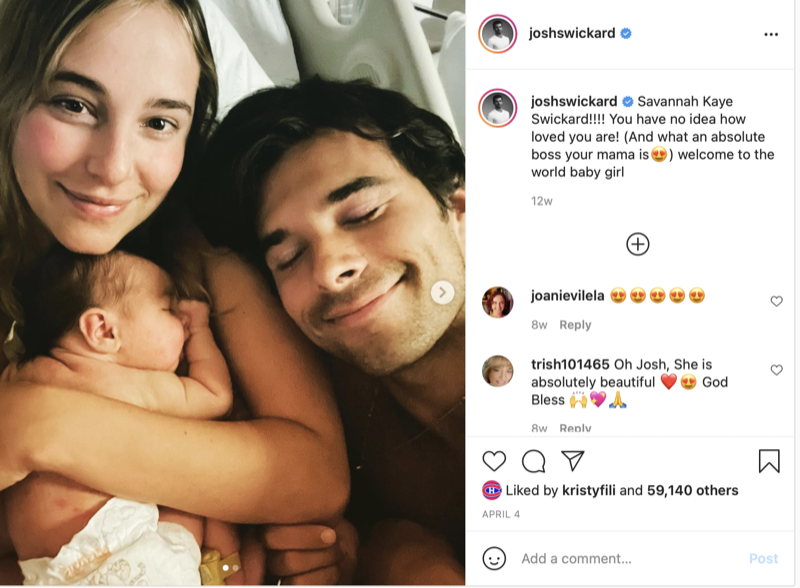 The year 2021 has so far been quite a year for Swickard as his wife Lauren gave birth to their first child, a little girl named Savannah. The little bundle of pink was born on Friday, April 2. “Savannah Kaye Swickard, you have no idea how loved you are (And what an absolute boss your Mama is),” her Daddy wrote on Instagram to announce her birth. “Welcome to the world, Baby Girl.”

In June, Swickard posted to Instagram that he and Lauren were starting another film project together but would not say what the project is. Guess we’ll have to pay attention to the General Hospital actors life to find out.