In case you missed it, Britch returned with a bang, erm, make that bangs, that set off a veritable sh*t storm online.

McCullough tweeted, “What up, Britt? You stole my hairdo and my job.” That’s because Britt was brought back as the GH Chief of Staff, and she had a rather unique hairdo to match.

There were so many negative comments about her new hair that Thiebaud tweeted, “Hey everyone- yes I have bangs. Yes, they were cut too short and yes they don’t look the best. So please save your nasty tweets. Thanks.”

What up Britt? You stole my hairdo and my job 😷 https://t.co/zK8QWzBsdt

Hey everyone- yes i have bangs. Yes they were cut too short and yes they don’t look the best. So please save your nasty tweets. Thanks.

Fans loved Thiebaud’s cool reaction to the hotheaded drama over her bangs and made sure she knew they loved her, her acting, and her comeback with a ton of compliments and supportive comments. Can Bang-Gate be over now?

Back in the day Britt and Robin battled over lots of things including hunky Patrick Drake (Jason Thompson) as well as their hospital turf. Any chance Robin can come back and take Britt down a notch or two?

That’s probably wishful thinking because McCullough has launched a successful directing career on shows such as One Day at a Time, It’s Always Sunny in Philadelphia, The Bold Type, and Roswell, New Mexico. 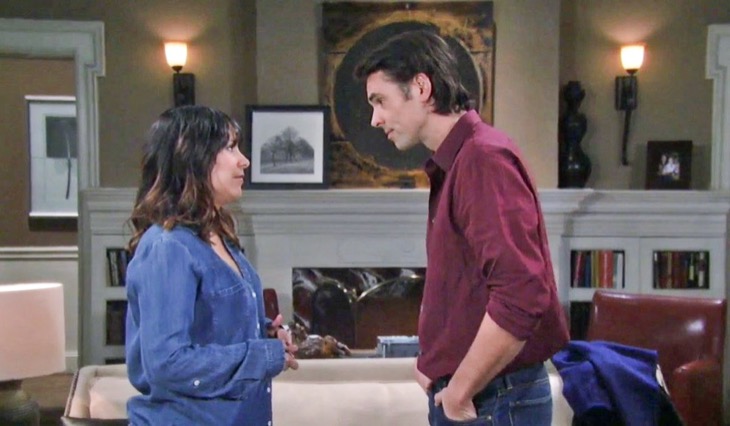 General Hospital spoilers – What kind of trouble will Britch cause next?

McCullough also amused fans by tweeting, “Wait, who is Neil?” asked McCullough. “Alexis killed her therapist?!?” That is in reference to Alexis Davis (Nancy Lee Grahn) recently waking up to find her lover Neil Byrne (Joe Flanigan) dead in her bed.

It looked for a time that Neil would be another one of Alexis’ love casualties, but the plot has thickened. Neil shot up an opioid when Alexis wasn’t looking, and that’s what did him in. Now Cyrus Renault (Jeff Kober) is being blamed for the death, and as you can see now is a great time to be a GH fan! There are loads of sizzling storylines to feast on and TPTB have done a great job of coming back from the production hiatus with guns blazing.

Be sure to tune in to see who Britt offends next in Port Charles!