ABC General Hospital spoilers and updates tease that when Gladys Corbin (Bonnie Burroughs) shows up at Mike Corbin’s (Max Gail) after-funeral reception at the Metro Court, Carly Corinthos (Laura Wright) tells Gladys it would be better if she left!

Viewers will recall from Friday’s episode that Gladys showed up at the Metro Court after Turning Woods told her Mike’s funeral had been that day. She claimed to Carly and Sonny Corinthos (Maurice Benard) that Mike had “visited her” in her car and told her that he wanted Sonny to make Brando Corbin (Johnny Wactor) more of an equal partner in Sonny’s “business”. Sonny didn’t believe her and Brando was embarrassed! In the sneak peek for Monday’s episode, the scene picks up with Carly and Sam McCall (Kelly Monaco) having quite the discussion with Gladys!

Sam stares daggers at Gladys the whole time as she tries to use the celebration of Mike’s life as a time to bargain for herself and Brando! The three women stand at the bar in the Metro Court and things get a little ugly. Carly tells Gladys she knows it was a long drive from Bridgeport, Connecticut to Port Charles, New York, and offers her a free room. Gladys sneers, and tells her she can’t buy her off with a hotel room! She continues and says Brando deserves an important role in Sonny’s business! Carly tells her that Brando’s gifts would be wasted in the coffee business.\

Gladys tells Carly she’s not talking about Brando working in the coffee business! Sam tells her that’s the only business Sonny has, as Gladys looks smug. Carly tells her Sam is right. Carly tells Gladys that Brando had wanted to work in a garage, so Sonny set him up in one of his own. Gladys rolls her eyes, and says her son deserves much better than this! She tells Carly and Sam to think of everything that Brando has done for this family! An increasingly angry Carly tells her that’s enough! She reminds her that they are there mourning her father-in-law and Gladys’ own cousin, and that is all they are going to do! 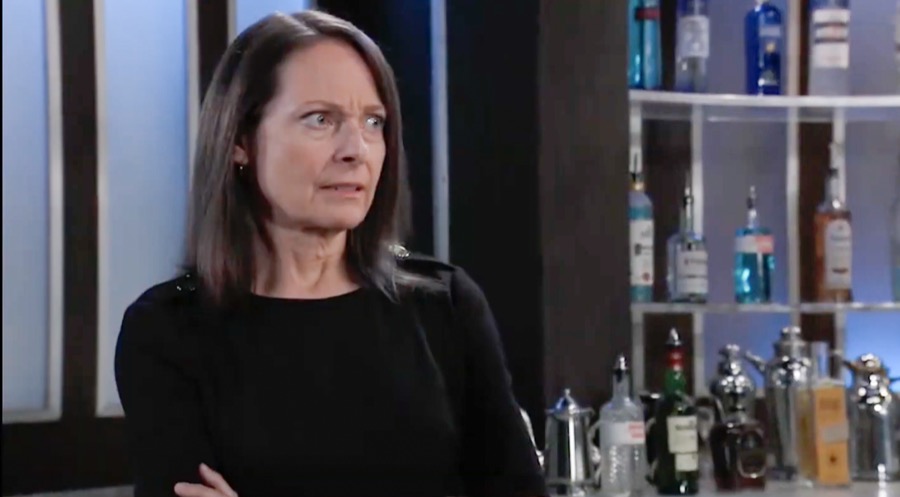 Carly sternly looks at Gladys as she asks her if she understands. Gladys just rolls her eyes and looks offended, and tells Carly she was just asking a question! Carly strikes back, saying sure she was – but she wasn’t asking for Brando, she was asking for herself! Carly continues to make it clear to Gladys that this day is all about remembering Mike.

They can discuss her ambition for Brando and her greed at another time! Gladys tries to put a guilt trip on Carly, saying if Mike were there he would be ashamed of how her family treats her son!

Carly looks like she’s thinking Mike would be more ashamed of Gladys but doesn’t say so. She tells her if she wants to do something for her son, then gets back in the car that Sonny bought her and go back to Bridgeport! Then Carly tells her the Corinthos ATM is closed and asks if they understand each other!