General Hospital Spoilers tease that Scott Baldwin (Kin Shriner) was about to tell Dr. Leisl O’Brecht (Kathleen Gati) that he loves her when their private jet began to experience turbulence. As the oxygen masks were lowered from the ceiling, the pair inhaled what they believed to be oxygen. Scott was given a parachute and thrown out of the plane while Leisl was taken to parts unknown.

Scott survived. But Leisl remained missing. Eventually, she woke up to find that someone had found out about Leisl’s plan to kill Peter August (Wes Ramsey) and abducted before she could carry out her mission. As it turned out, Peter did have a hand in her abduction but he wasn’t working alone. The real mastermind behind the abduction was one of Leisl’s former loves, Victor Cassadine (Charles Shaughnessy). Peter has been working with Victor for quite awhile. Victor was captured and taken into custody but Peter managed to escape and took Leisl with him, alone with a mind controlled Drew Cain. 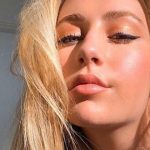 Although in an attempt to rescue her mother, Dr. Britt Westbourne inadvertently shot Leisl with a harpoon gun. The harpoon missed any vital organs so Leisl should survive. And once they are free of Peter, and Drew is released from Peter’s control, they will be headed back to Port Charles. Leisl will certainly need to be hospitalized from her injuries, but she should eventually recover. This will be music to Scott’s ears!

The reason Jason Morgan (Steve Burton) and Britt were able to locate Leisl is because they traced the spyware on Scott’s laptop with the help of Damian Spinelli (Bradford Anderson). Leisl will be thrilled that Scott was the one to lead her rescuers to her, even if he couldn’t go himself. Perhaps after all the commotion died down, Scott can finally tell Leisl that he loves her. It will be interesting to see Leisl react. She will likely be thrilled even if she doesn’t show it at first!

Will Leisl survive the harpoon? Can she make it off Cassadine island safely? And will she and Scott finally be able to declare their love to each other? Anything can happen in Port Charles so stay tuned to General Hospital airing weekdays on ABC. And don’t forget to check back right here regularly for all your General Hospital news, information and spoilers!