ABC General Hospital spoilers and updates reveal Alex Marick (Finola Hughes) has contacted Anna Devane (Finola Hughes) to set up a meeting. However, Alex is a wanted criminal and is offering to turn herself in. Is Alex setting Anna up for a twin switch again?

GH Spoilers – Alex Marjck Has Done This Before

General Hospital’s Alex has traded places with Anna before and would do it again in a heartbeat. Anna knows that Alex is up to something with this phone call, could she be trying to take Anna’s place again? Alex has met Hamilton Finn (Michael Easton) and was quite taken with him. Perhaps Alex’s plan is to marry Finn and live the rest of her life as Anna. Could Finn tell the difference between Anna and Alex or would he fall for the switch?

General Hospital’s Alex is the only other person who knows Peter August’s (Wes Ramsey) true parentage. Alex knows if she slept with Ceasar Faison (Anders Hove). Alexis knows which memories are hers and which belong to Anna. Is Alex eager to claim her son since she is now about to be a grandmother? After all, Alex is somehow keeping an eye on what is going on in Port Charles since she mentioned the baby. Alex could be tired of Anna playing mother to her child and want to get to know him herself now that Faison is out of the picture. Will Peter know the difference between the two? 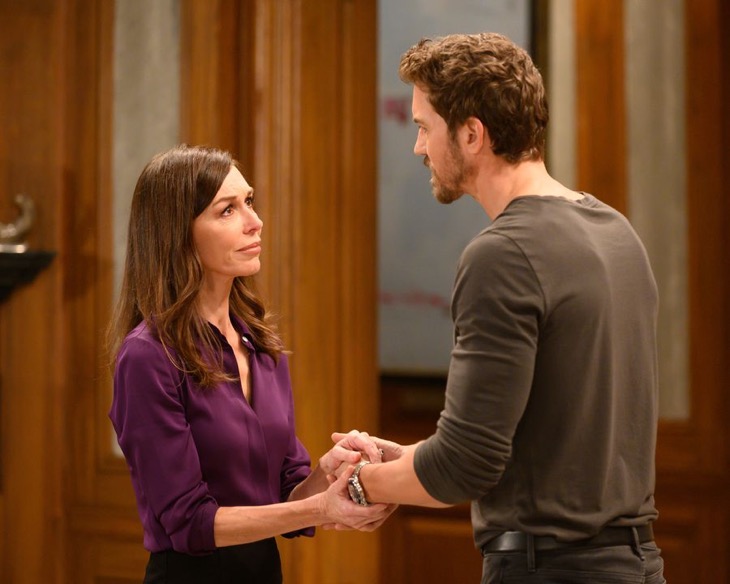 General Hospital’s Valentin Cassadine (James Patrick Stuart) is assisting Anna on this mission to take Alex down. Unfortunately, Valentin has proven that he cannot be trusted in the past. After all, Valentin did take Peter away from his adoptive family and give him to Faison. How can Anna honestly think she can trust Valentin to help bring Alex in?

Does Valentin’s suggestion of Anna setting her own trap not set off alarms in her brain? Isn’t it possible that Valentin is working with Alex to switch places with Anna? Is Valentin leading Anna into a trap instead of helping her stop her sister?

"I'm gonna go after Alex and I need you as backup." #GH pic.twitter.com/dhVtj731du

General Hospital’s Valentin feels responsible for Peter being raised by Faison. However, how long is Valentin supposed to pay for giving Faison his son? Is Valentin supposed to help Peter for the rest of his life? Peter has just enlisted Valentin’s help in handling Nelle Jerome (Chloe Lanier). Could Valentin be helping Alex to take over Anna’s life because it will benefit him somehow?