General Hospital viewers will have noticed that Victor’s attention has definitely been diverted from his long term “obsession” Liesl Obrecht (Kathleen Gati)! Liesl was still in captivity and in danger from Peter August (Wes Ramsey) on Cassadine Island when Victor got his immunity deal and was released from Port Charles Police Department’s jail! Victor wasn’t seen or heard from until after Drew Cain, (Cameron Mathison) Britt Westbourne (Kelly Thiebaud) and Liesl were back in Port Charles – and then he suddenly showed up at Alexis Davis’ (Nancy Lee Grahn) house for Thanksgiving! 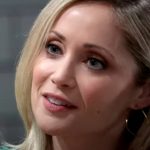 General Hospital viewers have to wonder if Victor even knows if Liesl is alive, let alone in Port Charles, or if he even cares! Victor shows up at Wyndemere after they all leave Alexis’ home, and it seems like even though he claims he has business to discuss with Nikolas, he’s much more interested in “business” with Ava! And what’s worse, she seems to be just as charmed and enchanted by him even as she stands there with Nikolas!

General Hospital Spoilers And Rumors – Might Ava Cassadine Remind Him Of A Certain Blonde From His Distant Past?

General Hospital viewers will recall that when Valentin Cassadine (James Patrick Stuart) was kidnapped by Victor in Crete, it was to enlist his help with Peter, who had turned on Victor – but also to tell Valentin the truth of his paternity. That is, if the tale is indeed true! Victor and Valentin were both at Alexis’ home for Thanksgiving, and Valentin mentioned that Victor was his father. Both men announced publicly that they were willing to take DNA tests to prove it, so unless Victor plans to fake the tests, it more than likely is true.

General Hospital viewers will recall that Helena Cassadine (Constance Towers) was Valentin’s mother, and Victor revealed that the two of them had an affair, producing Valentin. General Hospital viewers will also recall that it was Ava who had Helena’s portrait with the codicil to Mikkos Cassadine’s (John Colicos) will, disinheriting Valentin. Mikkos had found out he wasn’t Valentin’s father but obviously not who had been. The portrait exploded in the Jerome Art Gallery. Could there be another coincidence between Ava and the late Helena besides the portrait being in Ava’s gallery? Might Victor have been reminded of a much younger Helena when he saw Ava?

Longtime General Hospital viewers will remember when Ava was involved with Ryan Chamberlain, (Jon Lindstrom) having been charmed by him as well. Granted, she thought he was Kevin Collins (Jon Lindstrom) but it’s the age that counts. Ava is forty-seven Ryan and Kevin are sixty-three! That’s a bit of a gap – sixteen years, to be exact. Victor obviously is older than that – probably in his seventies at least! Victor, too, has been attracted to younger women – Liesl being one of them. Ava, having been raised by a single mother may have a daddy shaped hole in her heart.

Her father, Victor Jerome (Jack Axelrod) was never part of her life in any real way, although she would have had plenty of male relatives to fill in the gap on her Ryan side, being the daughter of Delia Ryan Coleridge (Ilene Kristen). General Hospital viewers will note that Ava has never mentioned Victor very much – and here is another Victor old enough to be her father, and reaching out to her in a very charming way! Ava may not realize where her seeming attraction to Nikolas’ great-uncle is coming from, but that might be it. As for Victor, Ava is blonde and glamorous, and maybe his attraction comes from his subconscious as well – reminding him of Helena, who very well may have been his first love!