ABC General Hospital spoilers tease that Wes Ramsey (Peter August/Henrik Faison) is looking back in fondness as he reflects on the three years he’s spent on the ABC sudser.

The handsome and talented actor wrote this on Insta: “3 yrs ago today I arrived on set to begin my first day of my new job playing a mysterious man showing up in town to stir things up. A humble & heartfelt thank you to my cast & crew for their tireless dedication to telling our stories & to the greatest fan base ever for keeping our world of Port Charles alive & well.”

Wes posted a pic of himself in character, with what looks to be a target on him as he talks on the phone. Wes’ fans loved his post and responded in kind with one writing, “Wellll as much as I don’t like on GH, I do like your playing of the character but I do hope that you remain on the show even though everybody is out to get cha.”

Another fan commented, “Thanks for portraying Peter in such a way the fans love to hate.” 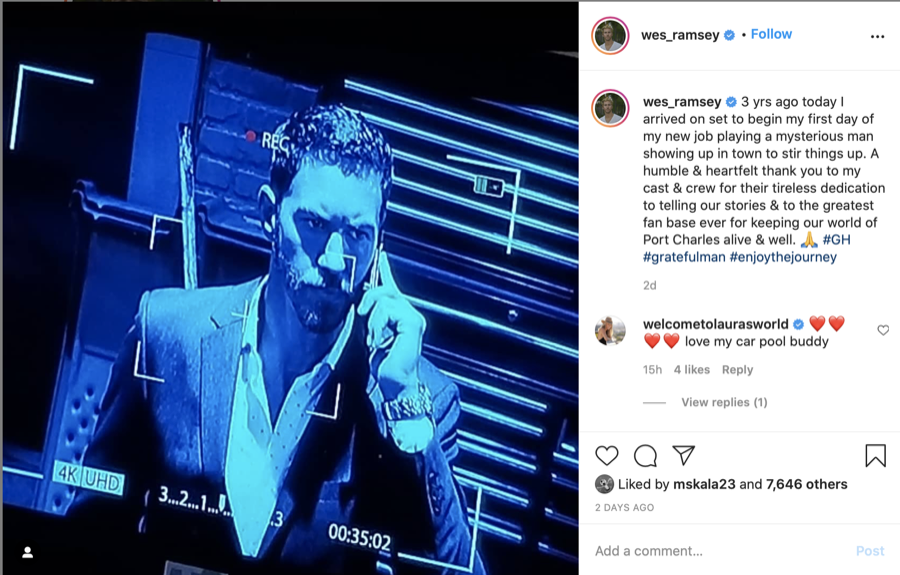 A lot has happened since Wes debuted on the legendary daytime drama. He came on as Henrik Faison and today he is Peter August! He’s playing the same character just with a different name, which points to a dilemma that the character has and that is that he is a bad guy masquerading as a good guy. Sooner or later his number will come up and that has fans divided.

Some want Peter to do time for his crime, and others want to perish the thought of Peter leaving town. Right now Liesel Obrecht (Kathleen Gati) is turning all of her firepower toward taking Peter down since he framed her for his misdeeds. To this end, she has unleashed Dante Falconeri (Dominic Zamprogna) on him.

General Hospital spoilers – What happens next for Peter August in Port Charles?

It seems unlikely that Peter will get away with what he’s done, but there is a complication on the horizon. His SO Maxie Jones (Kirsten Storms) is pregnant with his baby and if Peter were to be exposed it would ruin her life.

With Robert Scorpio (Tristan Rogers) and Damian Spinelli (Bradford Anderson) on the case, however, it looks like Peter will have his comeuppance.