Their mom posted a sweet message to Instagram on Tuesday writing, “THREE!!! Help me in wishing Erik & Theo a very happy 3rd birthday!! We are celebrating by playing at a park (so sad that that is a luxury this year!). They had a fun dinosaur ‘party’ this past weekend! They will also be filming at GH tomorrow and we’re counting that as a fun birthday present too!!”

There was also a photo of the cute and talented twins each holding up three fingers in case there was any doubt about their milestone birthday. 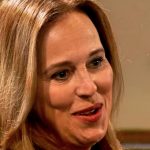 General Hospital spoilers: The Olsen Twins Play One Role on the ABC Soap

Erik and Theo have done an outstanding job of portraying the complicated life of little Wiley. Already in his young life he has been raised by numerous people and now it looks like his mom has “died.” That is a soap death however, and many fans believe that Nelle Benson (Chloe Lanier) will waltz back into Port Charles any day now.

For now Wiley is being raised by Michael Corinthos (Chad Duell) his biological dad. Soon he will have another grandma in his life as it has just been discovered that Nina Reeves (Cynthia Watros) is Nelle’s biological mother.

No doubt Nina will want to be a part of the adorable little boy’s life but that could be complicated due to the fact that his other grandma has beef with Nina.

Carly Corinthos (Laura Wright) is Wiley’s paternal grandma and she has been a very bad girl, lying about knowing the true connection between Nelle and Nina.

That means that Nina is out for bear where Carly is concerned and may take matters into her own hands if she just happens to stumble across an amnesiac Sonny Corinthos (Maurice Benard). If this happens, will she keep the truth from her nemesis?