General Hospital (GH) spoilers tease that in Port Charles Sasha Gilmore (Sofia Mattsson) will start to believe a reconciliation with Michael Corinthos (Chad Duell) may actually be possible. As viewers know, Sasha and Harrison Chase (Josh Swickard) pretended to have an affair so that Michael and Willow Tait (Katelyn MacMullen) would get married and ensure that they would get custody of Wiley Corinthos (Erik and Theo Olsen). The plan worked and as predicted Michael and Willow grew to have feelings for one another.

The truth came out!

Chase and Sasha were prepared to take that secret to their graves. But Sasha was having a difficult time coping with the loss of Michael, so she turned to drugs supplied by Cyrus Renault (Jeff Kober). As time went on, Sasha became addicted to the deadly substance and eventually overdosed. At that point, the truth about the faked affair came out. Michael stayed with Sasha the first night she was hospitalized and she became hopeful for a reconciliation? But is it just wishful thinking on Sasha’s part? 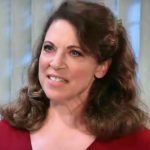 Willow and Michael have recently made love.

The same night that Sasha overdosed, Michael and Willow finally made love. They were ready to admit their feelings for each other and it seemed likely they would stick together. But Michael knows that he owes Sasha for helping him get Wiley. But Sasha may think it’s more than gratitude. She will likely be crushed if Michael and Willow stay together even now that they know the truth. Sasha hasn’t admitted yet that she is an addict and hasn’t joined any type of recovery program as of yet.

Sasha’s first instinct may be to go back to using drugs to cope with the fact that she and Michael may never reconcile. Sasha is already facing issues at Deception because of her overdose and this could easily put her over the edge. Luckily, Sasha seems to have someone else in her corner. And that someone is Brando Corbin (Johnny Watcor). Brando is currently working undercover for Cyrus, but he seems to have a soft spot for Sasha. As an addict himself, Brando knows what Sasha is going through and me be the only thing standing between Sasha and her downward spiral into drugs.

Will Michael and Sasha reconcile or is it just wishful thinking on Sasha’s part? Will her disappointment as well as problems at Deception convince Sasha to go back to drugs? Or can Brando show Sasha another way? Exciting times are coming in Port Charles, so stay tuned to General Hospital airing weekdays on ABC. And don’t forget to check back here regularly for all your General Hospital news, information and spoiliers!