ABC General Hospital spoilers reveal that Emme Rylan (Lulu Spencer) is speaking out after rumors surfaced that she and William deVry (Julian Jerome) have been let go from the ABC sudser. The Los Angeles resident posted on her in her Instagram stories on Thursday that she wanted to clear the air.

Immediately after the rumors came out Emme posted a touching photo on her Instagram of her being hugged by her kids and husband and her caption indicated that she was having a hard day although she did not elaborate.

From the outset, Emme explained that she had to be careful in how she addressed the situation she now finds herself in. At the same time, she made sure to express love for her fans who have inundated her with supportive messages.

Emme was not able to confirm nor deny the speculation that is out there regarding her departure from General Hospital. She did have something to say about her near future and no doubt fans will read between the lines of what she said. 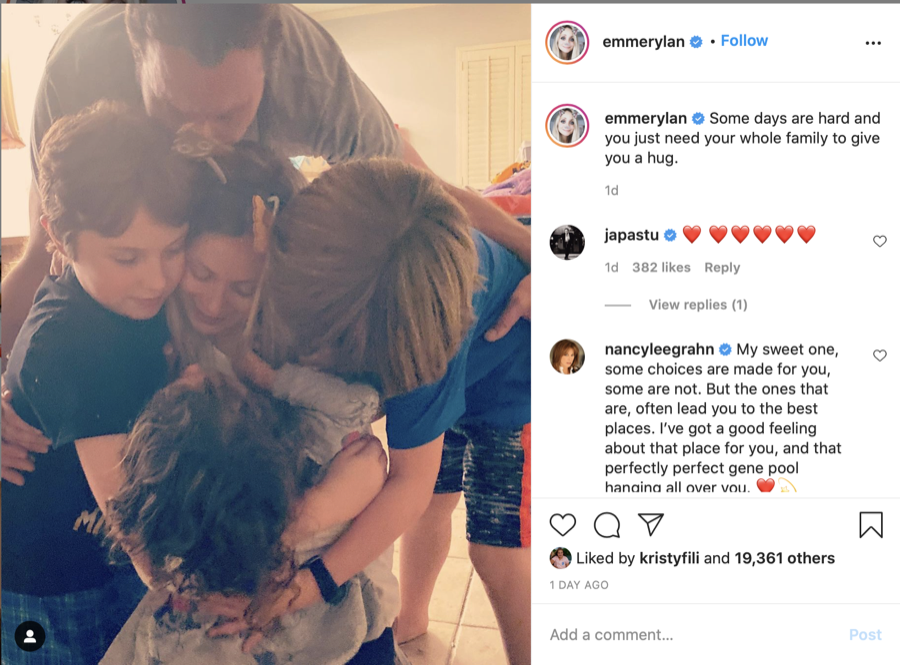 She started by saying, “I am not in a position to be able to comment on the work stuff. So in terms of General Hospital, I’m going to keep that topic quiet.” She added that she is able to talk about her upcoming plans and living situation.

She has been open with her fans about the family’s need to locate a new rental home as their landlord sold the house they are leasing. According to Emme the hunt was not going well and now it seems she has done a 180 with her living arrangements.

Emme has now shared that she and husband Don have decided to pack up their things store it in a pod as they are going to take to the open the road and see the sights. She is now in LA and she didn’t indicate an exact itinerary, but sometimes not having one is half the fun of travel!

Her two school-aged boys are distance learning, and her daughter is not yet in school so the family will be able to travel without worrying about school arrangements. She added that the kids are very excited about the family’s new adventure.

Entire life put in storage and hitting the road with the best partner I could ever ask for (yeah that’s you @dmoney596 ), 3 kids, 2 dogs, 2 cats, lots of face masks and no real solid life plan. 😬 What could go wrong?! 🤣😂 Help me name this trip!

The family is also taking their two dogs and two cats which should add to the excitement of being free as a bird to set one’s schedule according to a whim.

Emme said she’s lived in the Los Angeles and New York areas mostly and worked weekdays regularly since 2004 and now she is ready to mix it up a bit.

She promised to share the family’s travels on her Insta and we can’t wait to see what comes next for Emme and her beautiful family.