ABC General Hospital spoilers and updates reveal that Maurice Benard (Sonny Corinthos) will have a very special State of Mind airing this Sunday as it includes his costar Ingo Rademacher (Jasper “Jax” Jacks) and Ingo’s son.

Maurice has posted a clip to his Insta that shows him welcoming his guests and he’s so cool he’s gotta wear shades inside!

It sounds like the podcast will focus on the topic of anger and perhaps how it affects kids.

The clip shows Maurice holding his phone above his head as he films Ingo and his son walking in. He says, “Who’s that coming in,” and Ingo responds, “Hey what’s up are we gonna do this?”

GH fans loved the post with many commenting on how handsome the GH costars are and that they are looking forward to this weekend’s podcast.

What is Maurice’s character’s state of mind in Port Charles? At the moment Sonny Corinthos is involved in a massive firestorm of emotions. His dad Mike Corbin (Max Gail) just passed away and it was a struggle for Sonny to come to terms with his dad’s death.

At the same time, he is fighting against Cyrus Renault (Jeff Kober) for bragging rights. Actually he is fighting for a whole lot more as Cyrus is trying to move in on his territory. What’s a coffee importer to do? 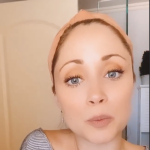 Sonny’s cousin Brando Corbin (Johnny Wactor) is smack dab in the middle of the warfare and he may end up being collateral damage. Brando is loyal to Sonny but Cyrus is trying to recruit him. What Cyrus doesn’t know is that Brando and Sonny are playing him and Brando will spy for his relative.

Then again, Cyrus is very crafty. Is it possible he himself is playing both ends against the middle? The way this turf war is shaping up, don’t be surprised if November Sweeps ushers in a whole new level of cray in Port Charles.