General Hospital (GH) spoilers tease that Vanessa Marcil (Brenda Barrett) just dropped some words that will no doubt have GH fans salivating about a possible return to Port Charles of the presumed dead Brenda Barrett.

She has a way of stoking the flames of speculation and on February 21 she talked on Instagram about the fabled Sonny and Brenda storylines. She was asked what her favorite moments between them were and she dropped a bombshell.

The lovely brunette said that, “My absolute favorite moments of all time between Brenda and Sonny are the ones that are still coming.”

Does that mean she’s retuning to the ABC sudser? We don’t think that the Emmy winner confirmed a return, more like she is musing out loud.

But she was happy to speculate what a comeback would be like. “To be on set with that man… I can’t really come up with words to describe it,” she said. “It literally pushes you into the next arena of your life and your growth, just to be in his presence. I think,” she added, “it’s because he’s so vulnerable.” 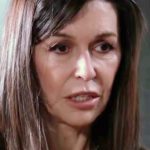 Marcil also appreciates his new look saying, “He’s like my dad. He’s not hot to me… Now I watch him, and I’m like, ‘When the hell did you get so hot?!?’ When Sonny and Brenda get back together, I think it’s gonna be like 9½ Weeks.”

The 1986 movie she references, 9½ weeks, starred Kim Basinger and Mickey Rourke in basically a movie all about their red hot monkey sex. According to Marcil, “the sex is so intimate and fun and unbridled… I think Sonny and Brenda have that to look forward to, an unbridled, passionate, love affair that isn’t shackled by immaturity and drama and the [bleeping] Mob and lies.”

Marcil has always maintained that she would come back to GH in a heartbeat. And her fans would love to see her back, doing anything, even washing dishes with amnesia, basically like Sonny is doing now.

Hey, there’s an idea—maybe Brenda shows up at the Tan-O and they set off on a new, memoryless adventure. What do you think happens next in Port Chuck, GH fans?