General Hospital (GH) spoilers reveal that Nancy Lee Grahn (Alexis Davis) is a frequent presence on social media and she’s just dropped a bombshell about one of the sudser’s alums.

Did you know that none other than royal runaway Meghan Markle got her acting start on the ABC sudser? Today she’s married to a prince and lives California but like many high profile celebs she began her career in daytime. It was many years ago, long before Meghan became a household name for all the wrong reasons.

Grahn posted some stills from a long ago episode in which Meghan is in scrubs with the caption: “Look who played a nurse on #Gh?. She was a lovely young [woman] then, and still is.”

If you check out YouTube there are a few videos of Meghan in the background with various actors such as A Martinez (Roy DiLucca) and Stuart Damon (Alan Quartermaine).

General Hospital spoilers: Where Meghan Markle Got Her Start

Did Meghan have help launching her career? Her dad, Thomas Markle, was a lighting director for the show at one time—small world.

After GH Meghan went on to appear in Cuts, Beverly Hills, 90210, CSI NY, Knight Rider, and Without a Trace, all bit parts. Her star blew up with Suits. 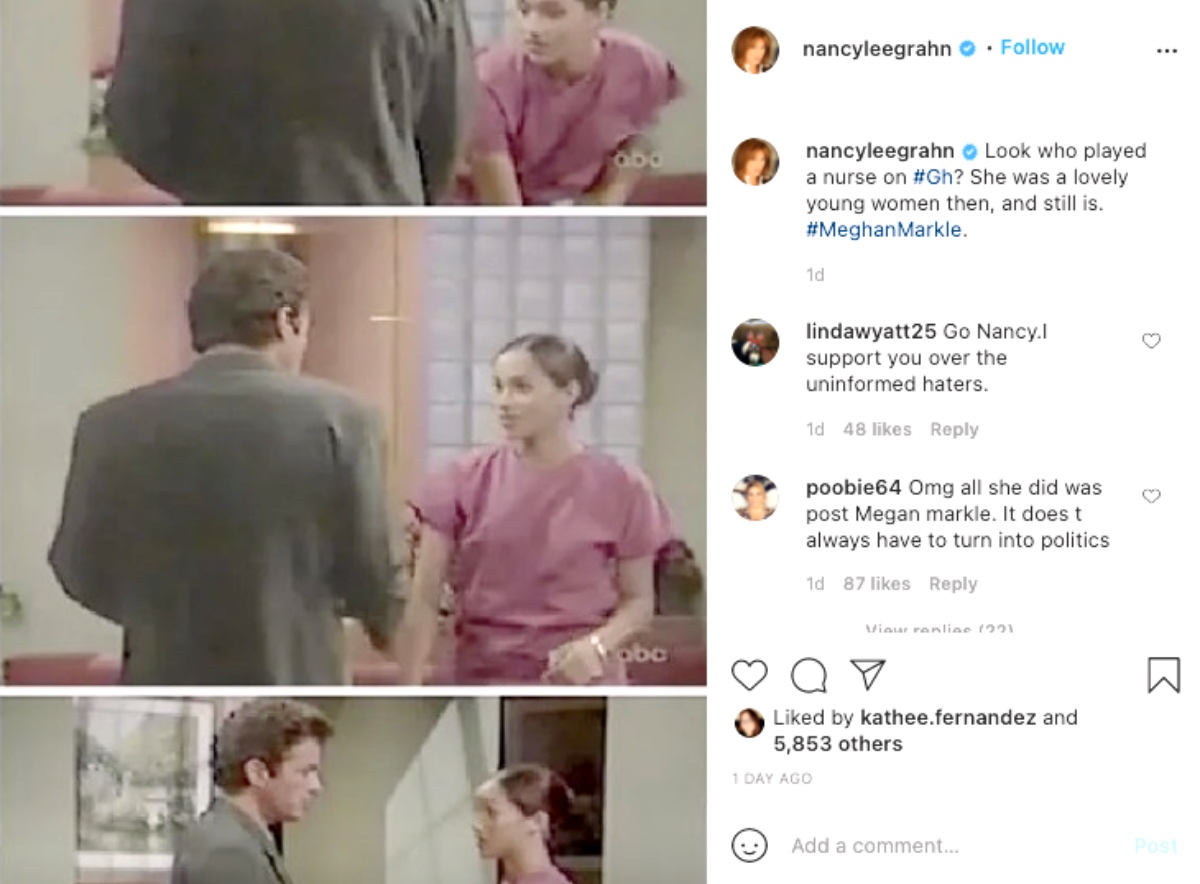 Markle married Prince Harry in 2018 and since then both have been best known for stirring the pot. They appeared on an Oprah Winfrey special in which they threw their families under the bus and have made suing those they disagree with a hobby.

Comments to Grahn’s post included this gem: “Oooo this goes way back look at the hospital set wow amazing 😍😍😍😍 who knew she’d be a royal now.”

Actually she’s a lapsed royal. Harry and Meghan spectacularly ditched the monarchy for what they greedily termed, “financial freedom.” Nonetheless, they demand to be called Duke and Duchess and refer to themselves that way.

Another fan posted, “That is so cool! Thanks for posting! I’ve been watching GH for 40 years and never noticed that!”

For now Grahn’s character Alexis is in jail, but that doesn’t mean the hot mess has stopped making waves. She recently got an inmate released and is now squaring off against fellow inmate Ryan Chamberlain (Jon Lindstrom). Never a dull moment with Alexis.