General Hospital (GH) spoilers reveal that many fans think Maurice Benard (Sonny Corinthos) is the daytime drama G.O.A.T. (greatest of all time). He’s starred on the popular ABC sudser for decades, won two Emmy awards, is a celebrated author and a prominent mental health advocate. But his own goat, Buddy, is the uncontested star of the Benard backyard!

Buddy has become a celeb in his own right due to Benard posting adorable pics and clips of the loveable but obstinate animal. His latest video of Buddy is hilarious and shows that he’s definitely becoming something of a diva among Benard’s other animals. Maybe he’s got acting in his DNA?

Benard captioned the clip: “Can someone please find me a goat therapist? Buddy has become a true DIVA!!! And I believe it’s from all the love he has gotten on Instagram. What do you think?”

Buddy is clearly pleased with himself in the video, refusing to come when Benard calls him, but finally giving in to his exasperated owner. 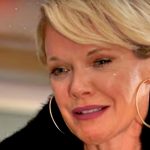 After watching the clip the fans were quick to give Buddy even more love and attention which will probably go straight to his head. One fan wrote, “He is probably a teen now. He won’t listen to you LOL,” and another said Buddy was just, “like my grandkids!!”

One fan wrote, “Your buddy goat is so cute❤️ I don’t have a goat but I have dog she’s a French poodle she act like that sometimes stubborn,” and one fan said, “Sooo cuuttee!! I have been thinking about getting 2 goats for my backyard too. But I dont know where to get them from. I wanted them from when they are babies. Any recommendations? I would appreciate it❤️ I live in Southern California…in the Antelope Valley. I wouldnt mind driving a few hrs to get them.”

There is no doubt that Buddy is a star in his own right! Maybe he can have a cameo at the next Nurses Ball?

Unlike Benard, his character is not loving life right now. Sonny Corinthos is presumed dead and causing a ruckus in a bar whose owners have taken him in. It seems like he could be found by Nina Reeves (Cynthia Watros) but will she do the right thing and return him to his family or use him for payback against Carly Corinthos (Laura Wright)?