General Hospital (GH) spoilers and rumors tease that Liesl Obrecht (Kathleen Gati) will form an unexpected alliance in upcoming episodes of General Hospital – she will humor Victor Cassadine (Charles Shaughnessy) in order to throw him off guard and gain his trust!

Longtime General Hospital viewers will recall that Liesl and Victor had been lovers long ago – that is why she had so easily convinced him that her late son Nathan West (Ryan Paevey) was his son. Liesl had lied about his paternity all those years to protect him from his real birth father and had given him to her late sister Madeline Reeves (Donna Mills) to raise. Liesl finally told Victor the truth as she shot him, and thought that she had killed him, shortly before the Crichton-Clark clinic exploded several years ago. General Hospital viewers will recall Liesl’s shock at seeing who her captor is, saying she thought he burnt to a crisp! Liesl was even more upset as she realized Victor had become more obsessed with her than she had ever been with Cesar Faison (Anders Hove) if that is possible! Victor’s jealousy drove him to set up a fake medical conference in St. Lucia, have her kidnapped, and her lover, Scott Baldwin (Kin Shriner) thrown off the private plane – he admitted it to her!

General Hospital viewers will recall that Liesl humored Dr. Warren Kirk (Christopher Cousins, Jamison Jones) when he was also obsessed with her in order to get freed from The Hague, and scoring an important medical position in a WSB medical research facility. Kirk too had fallen for Liesl but she strung him along. General Hospital viewers will recall that Scott had brought Franco Baldwin (Roger Howarth) who was suffering from a brain tumor that was inoperable to Kirk’s clinic. Unfortunately for Kirk, Scott spied Kirk trying to have his way with Liesl and sprung to action, accidentally dealing Kirk a death blow in the process! The difference between Warren Kirk and Victor Cassadine isn’t in the obsession, it’s in the history. Liesl never had a true relationship with Kirk and never consummated it, obviously, she must have consummated her long-ago relationship with Victor, or he wouldn’t have believed Nathan had been his son! 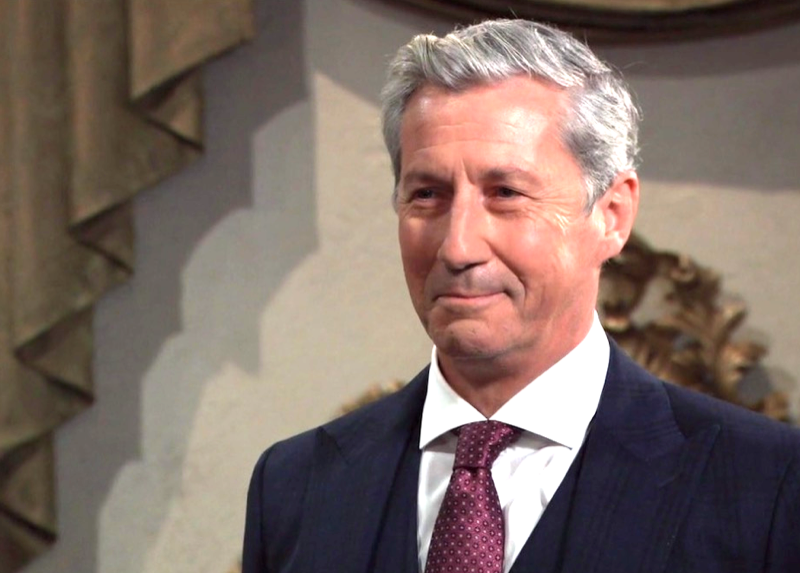 General Hospital viewers know that Liesl is very capable of conniving when she has to, and she decides on a plan that might open a door for her to escape! She decides to try the same thing with Victor as she did with Kirk – humoring him in his romantic obsession. Liesl knows that she will have to go about things much differently than she did with Kirk – after all, she knows that Victor is no dummkopf! Kirk, on the other hand, was much easier to manipulate! Victor, by his own admission, had spies following Liesl and that’s how he knew that her relationship with Scott was getting serious and he had to bring an end to it! Victor may have known about Kirk too, and depending on how many strings he still had to pull within the WSB, having been the former head of it, he could have had a lot to do with Liesl’s having been cleared of her charges related to Drew Cain (Cameron Mathison). Victor would have known Liesl had been playing Kirk if that had been the case so General Hospital viewers know that Liesl has to be very careful. 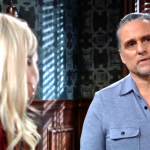 General Hospital viewers can expect that Liesl will start her plan by asking for a sit down with Victor so she can explain. General Hospital viewers will recall that Liesl had not been involved with anyone for years, since Faison and Victor prior to becoming involved with Scotty! Obviously, Victor likely knows that Faison died, and he might even know that Dr. Kevin Collins (Jon Lindstrom) kept his brain for study! Liesl may approach Victor with a question, like presuming he was dead and they hadn’t been involved for years, did he expect her to become a nun! Liesl may express her loneliness and her regret for having lost her temper and shooting him the last encounter they’d had before he kidnapped her. Whatever method she uses to humor Victor in his feelings for her and to regain his trust, Liesl will have to be very careful and very convincing, because she cannot risk Victor discovering that like Warren Kirk, she is playing him as well!