General Hospital (GH) spoilers and updates Nina Reeves (Cynthia Watros) has allowed herself to fall in love with Sonny Corinthos (Maurice Benard). Sonny thought he was a guy named Mike and has now learned that Nina has lied to him for months. Sonny is done with Nina and her lies. Can she face losing Sonny to Carly Corinthos (Laura Wright)?

General Hospital’s Nina hates Carly and has willingly kept Sonny from her and her children for months. Nina knew that everyone in Port Charles that loves Sonny was heartbroken over his death and chose to keep the fact that he is alive a secret. Nina wanted to get even with Carly over Nelle Benson’s (Chloe Lanier) death. Nina was also upset with Carly over Wiley Corinthos (Theo and Erik Olson). However, Sonny knows the truth after he almost died in a fire trying to save Nina. Sonny is furious and has every right to be. Will Sonny kick Nina to the curb for good?

General Hospital’s Sonny was near death when his father, Mike Corbin (ex-Max Gail) came to him again. Mike made sure that Sonny saw Carly and told him the choice to live or die was his. Sonny chose to live and go back to his wife and family. Sonny also now knows that Nina knew the truth all along. Sonny doesn’t understand how Nina could claim to love him and yet keep him from his loved ones. How could Nina let Sonny’s children grieve for him? How could Nina let Sonny’s wife marry another man? 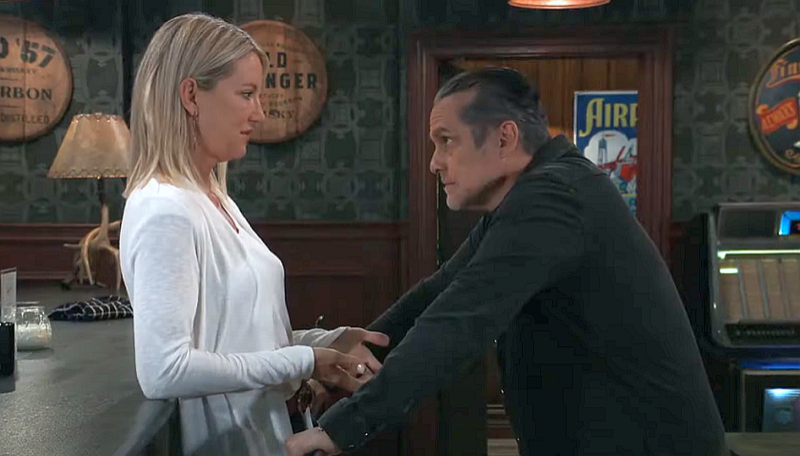 There Is No Going Back

General Hospital’s Sonny is furious with Nina over her lies. Nina believes she and Sonny can pick up where they left off as nothing has changed. Does Nina honestly believe that Sonny would willingly leave Carly for her? Sonny and Carly have loved each other for decades. Sonny and Carly always get back together in the end. Carly is Sonny’s soulmate and Nina could have reunited them months again but chose to let him live a lie. Sonny sees this as the ultimate betrayal. Nina has known Sonny and Carly for years and has chosen to lie to him. Betrayal is something that Sonny cannot forgive. Nina has lost not only “Mike” but Sonny as well but that is likely not all she will lose. Sonny and Nina share a grandson that she has kept him from and she will likely lose him as well.

Now that Nina has been kicked to the curb, where will she go from here? Will Nina find herself back in a mental institution after her bad choices this time? Has Nina truly had a mental breakdown?