General Hospital’s Brook posted a sexy photo on her Instagram wall stating that the wall of baseball photos needed improvement. Of course, fans from both GH and Passions, where Kerr played Whitney Russell, commented on her post praising her looks. Passions fans told Kerr she hadn’t aged a day in the past twenty years. Any GH fan can see that Kerr is a very beautiful woman and posing in front of that wall certainly made the wall look better for a little while. 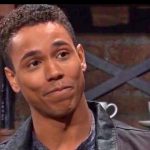 Portia Robinson Has A Sexy Side Too

General Hospital’s Brook is a sexy woman and she was making the best of the situation. Brook’s character, Portia has been out on the town showing off her stuff while helping Curtis Ashford (Donnell Turner) on a case. Curtis has decided he wants a change of pace while finishing up his last PI case of the evening. Curtis and Portia got the information they needed about a cheating spouse but neither want to leave the bar. Curtis is separated from his wife at the moment and Portia is unattached. Unfortunately, the two used to be a couple years ago and could certainly reignite an old flame if they spend much time together. Will Portia and Curtis rekindle an old flame?

Jordan can work with Cyrus Renault (Jeff Kober) and free Taggert if she is willing to cooperate. However, Cyrus wants Jordan to go after Jason Morgan (Steve Burton) for kidnapping which could get all of them involved in the middle of a mob war. Will GH fans see more of Portia away from the hospital if she gets into a romance with either Curtis or Taggert?

Most of General Hospital’s Portia’s time is spent at the hospital. However, it would be nice to see Portia in a romance with an available man. Could we see more of Brook’s sexy side as Portia steps out on the town? Will Portia soon have a love story of her own?