General Hospital spoilers and updates tease that Cassandra James, who plays the role of Dr. Terry Randolph in the daytime soap, shared that she’s starring in a new holiday drama titled, A Christmas Sunset.

In a previous tweet, the actress teased that she has something exciting to share with her fans the following day. She didn’t give any clue but she did tease that her General Hospital fans would love it.

As expected, her fans got curious and started to guess what it was all about.

“Terry and Britta are tag-teaming on playing Santa and reading the Christmas story to the kids at General Hospital, yes?” Steve Olle asked. 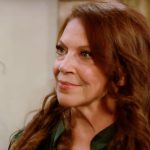 Meanwhile, Starbuck asked if her character Terry will smack down Nina while Travellady wondered if Terry would be “getting a story/love interest.”

The following day, on December 8, James finally revealed her surprise. She announced that the holiday drama, A Christmas Surprise, is now available on Amazon Prime.

James plays the role of Zoe on A Christmas Sunset. She’s one of five friends who come together to spend a holiday dinner in the wake of the death of a friend who linked them all. The strength of their friendship gets tested after they discover the journal that their deceased friend has left behind.

Ava Jerome Cassadine (Maura West) warns Nikolas Cassadine (Marcus Coloma) to tell the truth. She wants to make sure that he tells her everything there is about his relationship with Victor Cassadine (Charles Shaughnessy). Ava believes that Victor needs to be handled, which is why she needs to know everything about their dealings.

Britt Gets A Surprise Visit

As for Britt Westbourne (Kelly Thiebaud), she’ll get a surprise visitor. Spoilers hint that Selina Wu will drop by. Britt will wonder what the visit is about but it may have something to do with Brad Cooper (Parry Shen). The latter will soon have his parole hearing and Ms. Wu may be expecting Britt to put in a good word for him.

It seems like the show has given her a new name other than Ms. Nina Wu (Lydia Look) so as to avoid fans from getting confused between her and Nina Reeves (Cynthia Watros).