ABC General Hospital’s Brook Lynn Quartermaine (Briana Lane) is back to stay and needs a man. Who is Port Charles is right for Brook?

General Hospital’s Dante Falconeri (Dominic Zamprogna) and Brook have been friends for years. Dante’s mother Olivia Falconeri (Lisa LoCicero) and Brook’s mother, Lois Cerullo (Lesli Kay) grew up in Bensonhurst together. Dante and Brook have a lot in common because of their parents. Brook and Dante have certainly had their issues. Brook did try to seduce Dante to break up him and Lulu Spencer (Emme Rylan) at one time. Brook and Dante have always had chemistry. Dante is coming home a free man after his divorce. Could Brook and Dante make it as a couple? 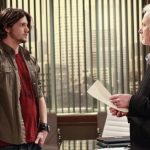 General Hospital Spoilers and Rumors: With Ethan Returning For Holly’s Funeral Can Luke Be Far Behind?

#2 Brook Lynn And Dustin Phillips Used To Be An Item

General Hospital’s Valentin Cassadine (James Patrick Stuart) would not be the head of ELQ if not for Brook. Now Brook has been attacked and almost died. Will Brook accept help from Valentin that she won’t take from her father? Could Valentin and Brook bond and their relationship suddenly turn romantic? Can Valentin accept anyone that isn’t Nina as a mate?

General Hospital’s Harrison Chase (Josh Swickard) is free after his breakup with Willow Corinthos (Katelyn MacMullen). Chase and Sasha Gilmore (Sofia Mattsson) blew their relationships so that Willow could marry Michael Corinthos (Chad Duell). Sasha has been singing Chase’s praises to Brook who has always had a contentious relationship with him. Chase has, after all, arrested Brook three times. Could Chase and Brook’s former dislike for each other turn to passion? Could Brook pick up the pieces of Chase’s broken heart after he witnessed Michael and Willow’s commitment to each other and Michael’s son?

Brook has also had a relationship with Nikolas Cassadine (Marcus Coloma) in the past but now that he’s married to Ava Cassadine (Maura West), Nik is out of the running. Who is the lucky bachelor who could mend Brook’s heart and show her the love she deserves?