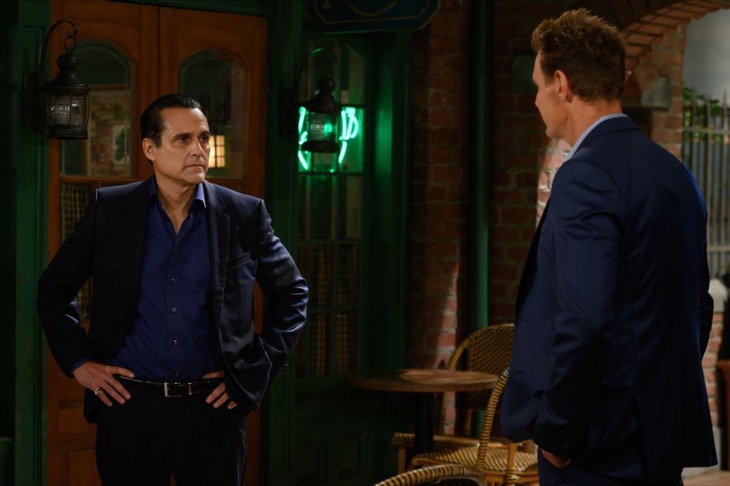 ABC General Hospital spoilers for two incredible weeks of tremendous thrills and action are about to unfold and we warn you, you may not believe what you are about to read in the previews for the weeks of August 31 all the way up to September 11 GH fans!

General Hospital spoilers – A couple reunites then blows up?

General Hospital spoilers for August 31 to September 4 include a week that kicks off with a connection between Alexis Davis (Nancy Lee Grahn) and Neil Byrne (Joe Flanigan). But is it a love connection?

On Tuesday Alexis is heartbroken; she can’t win for losing! Nina Reeves (Cynthia Watros) is closer to finding her daughter and will Carly Corinthos (Laura Wright) tell Jax something she should be telling Sonny instead?

Later in the week, Sonny is vulnerable and his baby momma Olivia Falconeri (Lisa LoCicero) has concerns about their kid Dante Falconeri (Dominic Zamprogna). When did she stop having ESP—that would alert her that her baby boy is on his way!

Harrison Chase (Josh Swickard) is sick of his deception and Robert Scorpio (Tristan Rogers) says something to Anna Devane (Finola Hughes) that might make her skin crawl.

Next thing you know, on Thursday, September 3, Anna gets a troubling call at the same time her bad-boy son Peter August (Wes Ramsey) and his SO enjoy some alone time—is it the calm before the storm?

The Friday General Hospital cliffhanger will have Damian Spinelli (Bradford Anderson) in the catbird seat—all of this sounds like Peter is about to be busted?

On Monday, September 7, Nelle Benson (Chloe Lanier) crosses paths with Valentin, and Willow goes to Chase for something forbidden?
The next day Olivia is distraught and Sam is blaming herself for something—what did she do this time?

On Wednesday there is an alpha showdown as Jordan Ashford (Briana Nicole Henry) confronts Cyrus Renault (Jeff Kober). Um, what is Carly doing shares drinks with Brick (Stephen A. Smith)? We don’t care, we are thrilled he is back!

Elsewhere Bobbie Spencer (Jacklyn Zeman) rips into Valentin and the teen scene gets intense as secrets are spilled.

The next day Mike Corbin (Max Gail) takes a dive and Jax and Nina go out of town—is it to find her daughter? At the same time Robert receives a very mysterious phone call—run, Peter, run!

This week’s Friday cliffhanger shows that Mike gets a surprise visitor, and Liz Webber (Rebecca Herbst) is regretful. Best of all, the Britch is back!