Johnny has been thrilling fans with his portrayal of enigmatic mechanic Brando who just so happens to also be very attractive to a whole host of Port Charles’ beauties. What does the future hold for the handsome and talented relative of Sonny Corinthos (Maurice Benard)?

Johnny debuted on GH this year. He has been active in theatrical productions going back to his middle school years and he starred in his first professional gig, Lifetime’s Army Wives, while at the College of Charleston. 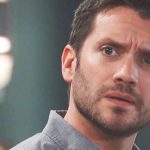 He went on to appear in multiple films such as Snap Judgement, Mr. and Mrs. Kill, The Grass Is Never Greener, Synchronicity, Lover’s Speed, GoldenBox, Roundhay Hall, The Con-Artist, and The Proposal, plus a starring role in the series Siberia.

GH fans were introduced to the mysterious Brando when he oddly showed up during a mob shootout—sounds about right for Port Charles! It wasn’t long before viewers learned that he was Gladys Corbin’s (Bonnie Burroughs) “dead” son. Gladys is Mike Corbin’s (Max Gail) cousin and thus Sonny’s extended kin.
Quirky Gladys hasn’t made Sonny’s life any easier but she has provided him with an alibi for Dev Corbin (Ashton Arbab), the Turkish teen Sonny is sheltering. Supposedly Brando is Dev’s dad, which is a long and complicated soapy story.

Speaking of complications, Brando was the drive-by love victim of impulsive Molly Lansing Davis (Haley Pullos) who chose him to have revenge sex with after thinking her boyfriend had ghosted her.

Now he is the lead suspect in the tampering of Jason Morgan’s (Steve Burton) motorcycle. At least he is in the eyes of Sam McCall (Kelly Monaco). She also seems to have eyes for him in a more seductive sense, and viewers are speculating like mad that Brando will bed more than one of kooky Alexis Davis’ (Nancy Lee Grahn) equally wacky daughters!

We will no doubt learn much more about Brando in the coming days and weeks as his family continue to do what they do best and that is encounter trouble!
Be sure to catch up on everything happening with GH right now. Come back here often for General Hospital spoilers, news, and updates.