ABC General Hospital spoilers reveal that a holly, jolly Christmas could elude the Corinthos family this year; what else is new in 2020 though, right? Sonny Corinthos (Maurice Benard) is missing after trying to bring Julian Jerome (William deVry) to justice. He and the bad guy went for an unintentional swim in frigid waters at night, and now only Julian’s body has surfaced.

Which means that Carly Corinthos (Laura Wright) is turned inside out. How will she manage to put on a happy face and pretend all is ok? Wright talked to TV Insider about that very scenario and we have the inside scoop for you here!

She set the scene by saying, “They don’t know for sure what’s going on. This is Michael’s [Chad Duell] first Christmas with Wiley [Theo and Erik Olson], and Carly will not ruin that. She’s not going to dump this on them. She and Jason [Steve Burton] will handle the worst-case scenario when they have to. But not tonight. Sonny would want them to handle things this way.” 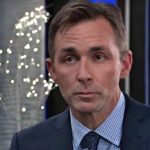 So in other words, Carly will do what she does best, lie through her teeth!

Jason knows what’s going on and he can handle Armageddon if it came to that, but what about Carly’s emotional needs? There’s an ex for that, Jasper Jax (Ingo Rademacher).

General Hospital spoilers – Will Jasper Jacks be there for Carly Corinthos when she needs him?

Wright has this to say about Jax: “The only other person to turn to is Jax. He knows when Carly’s deflecting and when she’s trying to compensate.”

That’s because the two of them have just come off spinning a great big yarn about Nelle Benson’s (Chloe Lanier) so what’s a little more fibbing going to hurt?

General Hospital spoilers – What happens next to the Corinthos family in Port Charles?

Wright reflected on Carly’s relationship with Sonny by saying, “Carly and Sonny are now on a level that’s just different from where they were in the past. I don’t know how you create conflict for that. I think Sonny going missing, as he has, is the only way it could have happened.”

Of course Sonny didn’t try to create conflict by plunging into the chilly waters but what happens next is anyone’s guess. Will there be a Christmas miracle to celebrate? Or another death to deal with? Be sure to tune in and find out GH fans, the answer may surprise you!