ABC General Hospital spoilers reveal that Steve Burton (Jason Morgan) has tons of fans curious, a little alarmed, and a bit confused with his latest Insta post. Did he really just say goodbye to Port Chuck?

You be the judge based on his post: “Looking back at what an AMAZING ride Port Chuck was! Thank YOU and thanks to @bfordanderson @brandonjbarash @scottreevesforreal for some of the best times of my life!”

He shared a pic of himself wearing a Port Chuck band sweatshirt that has some fans wondering what exactly he is saying goodbye to, and how final that goodbye is.

The band Port Chuck formed in 2010, composed of Steve, GH’s Bradford Anderson (Damian Spinelli), Brandon Barash who played Johnny Zacchara on GH, and who is now Jake on Days of our Lives, and Scott Reeves who was Steven Webber on GH.

The band performing at venues around the country and played a blend of pop, rock, and country hits. Reeves is an established musician who performed as part of the country duo Blue County, and the others weren’t bad either!

It was hard to tell who was having more fun, the band or the fans. They had tour dates scheduled in 2019 but technical issues prevented them from performing. 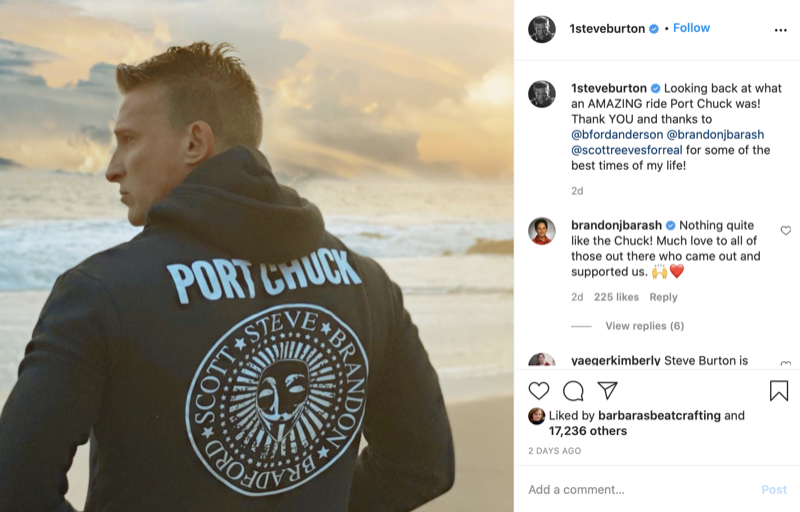 General Hospital spoilers – What has happened to Port Chuck?

Fans were quick to respond, but not everyone was on the same page, with some thinking Steve quit GH and others taking his post to mean the band was done.

One wrote, “great memories & music I want that hoodie it looks amazing,” and another said, “Wait, what? That sounds like a goodbye, I sure hope not!”

One fan was afraid Steve was leaving the show: “Omg I haven’t watched since COVID delayed it, if you leave I’m going to be devastated!!!! Noooooo.”

Another fan wrote, “Wait, you’re not leaving GH, are you??? I’ve watched it for years! Also, you and the Jackle are awesome together.”

For his part, Barash commented, “Nothing quite like the Chuck! Much love to all of those out there who came out and supported us.”

By all appearances, Steve is saying that the band Port Chuck has been retired. But aside from his role as Jason Morgan on the ABC sudser you can also catch him and Anderson via their Stone Cold & the Jackal podcasts and live appearances!