Otis was born on June 7, 2017 and his proud mom posted a pic of the little guy that shows him already having fun with numbers. She captioned the adorable post: “Now he’s into subtraction.”

In a 2015 blog post McCullough revealed that she had suffered the miscarriage of her daughter, at 22-weeks. In 2016 she revealed she was pregnant again with her second child, and McCullough gave birth to her son, Otis, on June 7, 2017.

Kimberly Anne McCullough was born on March 5, 1978. She was born in Bellflower, California and has two older brothers. She debuted as Robin Scorpio on the soap opera at the age of 7 in 1985. 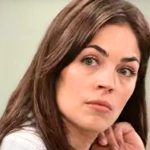 McCullough’s first credit came when she was even younger than her son Otis. She appeared as a 7-month-old baby in a diaper commercial, co-starring with British actress Juliet Mills. McCullough also appeared in Breakin’ 2: Electric Boogaloo. These days Kimberly is focused on directing and has not appeared on GH in some time.

McCullough debuted in the Asian Quarter storyline, and by 1989, at the age of 11, McCullough won her first Daytime Emmy Award, for “Outstanding Juvenile Female in a Drama Series.”

She is remembered for one of the show’s most memorable storylines, the star-crossed romance with Stone Cates (Michael Sutton). The plot debuted in 1995, when teenage Robin contracted HIV after having unprotected sex with Stone; he later died of AIDS.

The actress won a second Daytime Emmy in 1996 for this storyline, in the category “Outstanding Younger Leading Actress in a Drama Series.”

In 1996, she left the show to attend New York University Tisch School of the Arts.

Anna Devane is set to marry Hamilton Finn (Michael Easton) and fans are hoping that Robin can be back for the wedding. Will that happen? First the show has to air the wedding! Daytime dramas have been preempted in recent days for the second impeachment trial of Donald Trump.