General Hospital (GH) spoilers and updates tease that Nina Reeves (Cynthia Watros) and “Mike’s” aka Sonny Corinthos (Maurice Benard) relationship will ramp up as she and Sonny decide to officially date in an upcoming episode of General Hospital!

General Hospital viewers can imagine that the appearance of “Peter Sinclair” aka Peter August (Wes Ramsey) in Nixon Falls can only drive a fearful Nina even closer to a protective “Mike”. Peter must be lying low or be otherwise occupied for the moment, as Nina and “Mike” decide to begin officially dating not long after Peter’s reappearance from the “dead”. Of course, he’s not the only one to have reappeared from the “dead” only Peter knows who he is and remembers his life – Sonny doesn’t, as he explained to Peter outside the Tan-O. Nina has to be worried if Peter saw Maxie Jones (Kirsten Storms) as she left – General Hospital viewers will recall he did, but oddly enough didn’t immediately take off after her! In spite of Peter’s appearance, however, Nina and “Mike’s” relationship and their feelings really start to heat up!

As for Sonny, after the sudden death of Lenny Caulfield (Rif Hutton) he’s decided he doesn’t need to wait any longer to act on his feelings for Nina, as General Hospital viewers will remember. He had mentioned Lenny and Phyllis Caulfield’s (Joyce Guy) fifty-plus year love and wanted that for himself. He thinks he’s found it in Nina, and he ramps up his pursuit of romance and a future with her. 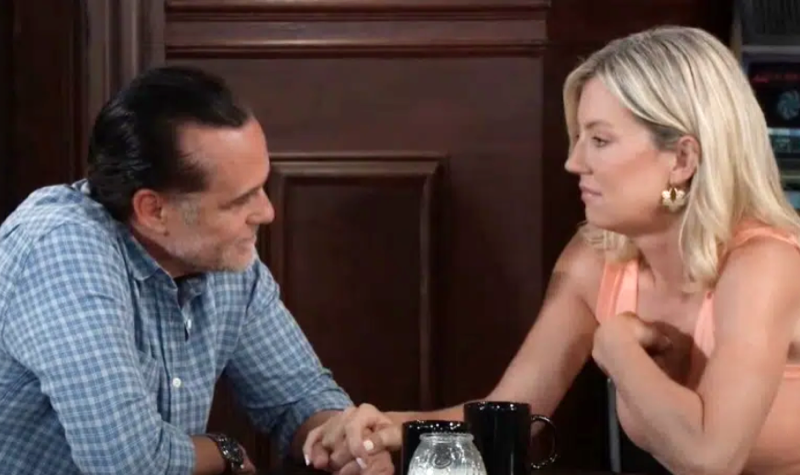 They decide upon a romantic dinner for their first real date, and as General Hospital viewers know, one thing that “Mike” does remember from his old life as Sonny Corinthos is how to make a mean marinara, and so more than likely he decides to cook their romantic dinner for himself and Nina. It’s a long way from Pozzulo’s, but “Mike” can create all the ambiance that’s needed for their special meal.

Mike And Nina Reeves Spend A Romantic First Date Together

General Hospital viewers can expect that “Mike” and Nina will spend a romantic first date together over their romantic dinner, and somehow Nina will forget if only for a little while, the looming threat of Peter’s recent reappearance. Peter has likely blackmailed Nina into keeping his survival a secret with threats of exposing Sonny’s survival and Nina’s knowledge of it. Nina is between a rock and a hard place and probably wishes she’d let Peter die in that cabin at the hands of her Aunt Liesl Obrecht (Kathleen Gati) all those years ago – she might even wish “Mike” would regain his full memory and takedown Peter! General Hospital viewers will recall that was Liesl’s response to Peter killing her son Nathan West (Ryan Paevey). But “Mike” doesn’t know who he was back in Port Charles, and doesn’t know who Peter was then, let alone who he really is now! He just thinks he’s an old work associate of Nina’s! Nina decides to try and focus on the now – and the love that “Mike” obviously has for her.