General Hospital (GH) spoilers divulge that Jophielle Love, who stars as Violet Finn has shared some of her latest audition pics and they are cute as can be. She debuted in GH in 2019 and has quickly become a fan fave.

Love has been doing auditions outside of General Hospital and it is clear that her talent is exceptional. The new pics are on her Instagram account and clearly show that the future looks bright for this pint-sized star.

General Hospital spoilers: Violet Finn is a Character on the ABC Sudser

Violet’s parents are Hayden Barnes (Rebecca Budig) and Hamilton Finn (Michael Easton). In the beginning she had no clue who her dad was and ever since finding out that Finn is her dad the two have been inseparable.

Some of that has to do with the fact that Hayden deserted her child not long after revealing the truth. Violet has gone to live with Finn and Anna but after last week’s episodes it appears both will need to find a new place to stay! 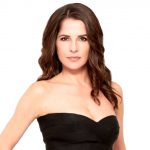 General Hospital spoilers: What Happened in the Double Wedding?

Violet had a standout moment as she starred as the flower girl at the double wedding of Peter August (Wes Ramsey) and Maxie Jones (Kirsten Storms) and Anna Devane (Finola Hughes) and Finn. Alas, neither couple married in the end.

It just wasn’t meant to be as Peter’s awful deceit was exposed and Anna’s role in the matter was also exposed.

General Hospital spoilers: What Happened in the Double Wedding?

Finn is keeping a whopper himself, but that didn’t keep him from going hypocritical on Anna for not revealing that she is Peter’s aunt and not his mom. That was enough to send Finn running like a maniac in his tux, and let’s hope Roxy the therapy lizard was up to the task.

But Finn has a secret, too. He suspects he is the dad and not the brother of Hamilton Chase (Josh Swickard). Oopsie, he slept with his dad’s bride the night before the wedding!

This is now all out in the open and just waiting on those DNA test results. In the meantime poor little Violet is being shielded by the adults’ ugly behavior the best those adults can manage. If they had just behaved in the first place none of this drama would be happening. What do you think GH fans, is Hamilton really Chase’s dad?

General Hospital Spoilers: Terry Randolph Apologizes To Liz For Not Being Able To Do More To Save Franco