ABC General Hospital spoilers reveal that Stephen A. Smith is making a comeback to the ABC sudser and we are pretty sure it will be to see his employer Sonny Corinthos (Maurice Benard). We last saw Brick in July 2019 and he returns the week of September 7, 2020.

Smith is a sports journalist and a vocal GH fan. He debuted as Sonny’s left-hand man in 2016 (everyone knows that Jason Morgan (Steve Burton) is his right-hand man!).

Brick was first seen when Sonny Corinthos called him to wire up the office of a foe so he could eavesdrop on a conversation with his enemies.

He returned in to keep an eye on another enemy, Julian Jerome (William DeVry). Brick is a hyper-masculine man of few words but it’s evident that he is smitten with Sonny’s beautiful wife Carly Corinthos (Laura Wright). 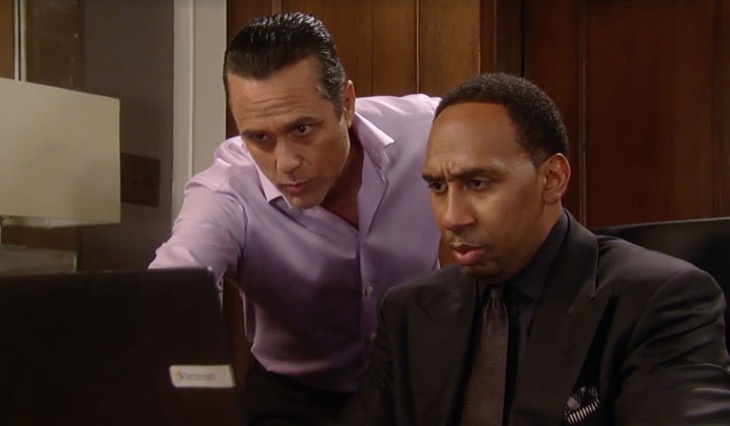 Brick returned in 2017 to help Jason find the person who killed Sonny’s son. At that time Curtis Ashford (Donnell Turner) was involved in the mission and when he questioned Brick’s equipment the monosyllabic enforcer was none too pleased with Curtis’ impudence!

Then on September 26, Brick was the one who helped Sonny trace a call from Russia to Patient 6. As you can see Brick is a man of many means, and they’re obviously is no task too big for Sonny to trust him with.

Brick’s huge reservoir of expertise in underworld matters came in handy in October when he was able to tell Sonny his phones were tapped by experts. No job is too small for Brick and while in town he managed to fix Mike Corbin’s (Max Gail) cell phone, no doubt further burnishing his bromance with The Dimpled Don.

General Hospital spoilers – What will Brick be called on to do next?

The next time we saw the maestro of mystery was in early 2019 when Brick helped Sonny find his elusive son Dante Falconeri (Dominic Zamprogna). Then, in July Brick was asked to forge documents to say Dev Cerci (Ashton Arbab) was part of Sonny’s family., Brick brought Dev the forged documents and that was the last time we saw the multitalented multitasker. Don’t we all need someone like uber-talented and loyal Brick in our lives?