General Hospital spoilers divulge that Maurice Benard (Sonny Corinthos) just posted a revealing photo on his Insta that could mean one of his costars is about to return. Could it be that Bryan Craig, who played Morgan Corinthos, is on his way back to Port Charles, NY? The picture is sure to fan the flames of speculation that Craig, who has been open about wanting to return to the soap, might soon be seen.

The curious picture in question shows Benard flanked by Craig and his other onscreen son Chad Duell (Michael Corinthos) with the caption: “My two sons entangled in a web of crime. Just kidding!!! @duelly @bryan_craig.”

The fans went wild with speculation about the meaning of the pic, with one saying, “Hmmmmm🤔🤔🤔😎😎😎me thinks this my be a hint.”

The pic was taken some time in the past as Benard has been posting recent pics of himself with a beard and salt and pepper hair. Fans have been quite vocal about wanting Craig to return, and for his part the daytime star has almost auditioned himself on his socials for any soap role that might be available.

Right now the time is right for a return and viewers are already wondering if Morgan could return along with Sonny who is currently MIA.

Sonny fell into frigid waters with Julian Jerome (William deVry) days ago and there has been no trace of him. In contrast Julian’s body washed up and was promptly zippered into a bag. Not so for Sonny. Which could be good or bad, depending on how things shake out. 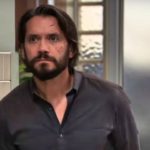 General Hospital spoilers: What Happens Next in Port Charles, NY?

It seems that Sonny will pop up at some point, but in what condition? Will he have amnesia? Will Sonny have undergone a life-altering moment of reckoning in which he denounced his life of crime? Some fans are speculating that a presumed dead character like Nelle Benson (Chloe Lanier) or Morgan Corinthos will bring Sonny back to town and to his family.

In the meantime his fam is falling apart. Carly Corinthos (Laura Wright) has single handedly reignited a mob war by kidnapping Cyrus Renault’s (Jeff Kober) frail mom from her long-term care bed and Jason Morgan (Steve Burton) is at a loss at how to calm the waters. Hurry back Sonny, and bring Morgan with you!