General Hospital spoilers reveal that Real Andrews (Marcus Taggert) has a new platform to interact with fans and we have all the details for you here.

He recently tweeted: “I’m discussing “General Hospital Breakfast 🥞 Club”. Saturday, Jan 30 at 6:55 AM PST on @joinclubhouse. Join us! https://joinclubhouse.com/event/VxV0d20m if you are not a member of clubhouse get on the waitlist list if you follow me I can add you :)” 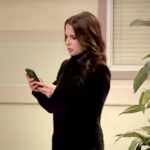 General Hospital spoilers: Do You Want to Have Breakfast With Real Andrews?

You can check out his social media and learn what you need to do to be a part of this exciting event! In the meantime Real’s fans are burning up social media with speculation about what his character Marcus Taggert does next.

Right now he’s cooling his jets in jail, after having faked his death. It’s not a crime to do that, and he had plenty of help, so why is he in jail? Good question!

Taggert’s situation is just as complicated as he is. It involves mob crime in Port Charles and doesn’t look to be resolved anytime soon.

I'm discussing “General Hospital Breakfast 🥞 Club”. Saturday, Jan 30 at 6:55 AM PST on @joinclubhouse. Join us! https://t.co/pac5gywX8W if you are not a member of clubhouse get on the waitlist list if you follow me I can add you 🙂

Fans were elated to see Taggert back on the ABC sudser after a period of being gone for years. It took him zero minutes to get back up to speed and soon he was calling Jason Morgan (Steve Burton) Anger Boy and trading insults with Sonny Corinthos (Maurice Benard). It was just like old times except that things quickly turned upside down.

Now the former enemies have an uneasy truce and Sonny and Jason were instrumental in keeping his death hidden. Ironically, now that Taggert is known to be alive, Sonny is believed to be dead, which is not true at all.

Be that as it may, the issue of Taggert’s future is up in the air. He’s in jail to protect him from mob boss Cyrus Renault (Jeff Kober). Once he’s free will he be an easy target? He can’t stay in jail forever. When he gets out he will have to deal with his angry daughter Trina Robinson (Sydney Mikayla) and seriously peeved ex Portia Robinson (Brooke Kerr).

And then there’s the question of him getting a thing going with his former colleague Jordan Ashford (Briana Nicole Henry) who is estranged from Curtis Ashford (Donnell Turner). Will Andrews discuss any of these plot points on his upcoming “General Hospital Breakfast 🥞 Club?” There’s only one way to find out!