General Hospital spoilers and updates reveal Hollywood actor Kin Shriner (Scotty Baldwin) knows a good thing when he sees it, especially when it comes to working with his great co-stars. The actor recently opened up about the great dynamic he shares with one of his best buds in Port Charles. Here’s what he has to say.

Kin says that he just spent a few “really fun” weeks with his co-stars Roger Howarth (Franco Baldwin), Rebecca Herbst (Elizabeth Webber) and Kathleen Gati (Obrecht) because of his character’s recent arc involving Franco’s brain tumor battle. Speaking to Soap Opera Digest in a new interview, Kin says that while he had a lot of fun shooting, he knows that fans love seeing Franco and Scotty together. Kin says that he believes his on-screen dynamic with Roger works so well because he is so “unpredictable.” 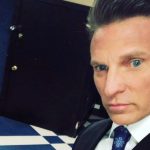 The actor puts it this way, “He doesn’t really know what I’m doing, I don’t know what he’s doing, and he’s with you in the scene. We connect in these scenes where I know that he knows that I’m there. There’s a connection and when you get that with an actor, it’s always fun. I had that with Lynn Herring and some other actors too, where you know that you’re both having a good time. I know if I do something off cuff, he’s going to react to it. He’s not going to go, ‘What just happened?’ He’s on the same page. We are working in the same rhythm.”

General Hospital News: What’s Next For Scotty And the Gang?

That right there might be the reason why fans love tuning in to all of the drama in Port Charles because the actors have just as much chemistry on screen as they do off. We also have a feeling that Roger would say the same thing about working with Kin. Now, as far as what’s next for Scotty, Franco and the rest of the gang remains to be seen. General Hospital fans will have to tune in! The soap airs weekdays on the ABC network. Check your local listings for times.