ABC General Hospital spoilers reveal that it was stunning when the news was announced that long time actress Emme Rylan would be leaving her role as Lulu Spencer. It was a move from out of left field especially since the character’s long-lost ex-husband had just returned to town.

Now fans are doubly shocked that poor Lulu Spencer was injured in an explosion and shipped out of town for treatment.

Rylan has left her L.A. rental home now that she is no longer working on the ABC sudser. She, her partner and their three young children are taking to the open road to experience a whole new kind of adventure.

Lulu is off the canvas and now her portrayer is talking about her point of view of went down and if she might ever return. A fan posted about her departure to Instagram and Rylan responded with these words: “I was told that I was being taken off contract and that the character was being put into a coma. I wasn’t informed about anything else. If they invite me back, I would DEFINITELY come back. I love my GH family.” 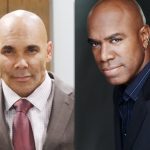 That all sounds hopeful and open-ended, doesn’t it? Maybe the show wants Dante Falconeri (Dominic Zamprogna) Lulu’s ex to find someone else, have her return, and then fans can sit back and watch the fireworks?

Rylan debuted in daytime using the name Marcy Rylan. She played Lizzie Spaulding on Guiding Light, then Abby Newman on The Young and the Restless. In 2013, she debuted as legacy character Lulu, the daughter of daytime’s most recognized supercouple, Luke and Laura.

In addition to Lulu’s ex-husband returning, things were heating up between her and Dustin Phillips (Mark Lawson). The world will never know what could have happened as poor Dustin was killed as a result of the Floating Rib explosion, the same explosion that put Lulu in a coma.

Fans must now focus on the loved ones that Lulu has left behind in Port Charles. In particular Dante must pick up the pieces of his life after being brainwashed by the WSB and losing his life’s partner—for now. Many GH fans see a pairing between him and Lulu’s bestie Maxie Jones (Kirsten Storms) on the horizon. Tell us what you think happens next GH fans!