General Hospital (GH) spoilers shows that Nancy Lee Grahn (Alexis Davis) is a proud mom of a recent college grad. Her fans are regularly treated to updates about her daughter Kate and now Grahn has shared the release of her daughter’s first EP.

The EP is titled Ragdoll and according to the snippet Grahn posted, the project is a winner!

Kate’s EP includes six tracks. They are titled: Untangling, The Name, Ragdoll, Into You, Glass, and Greyhound. After she posted some of one video, GH fans flocked online to send congrats Kate’s way. 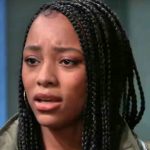 Many of Grahn’s costars also chimed in, such as William Lipton (Cameron Webber) who is a musician himself. He wrote, “So good,” and Eden McCoy (Josslyn Jacks) named Kate, “a STAR.”

Laura Wright (Carly Corinthos) shared that she was listening “all morning,” and told Kate to, “Keep kicking ass.”

Kelly Thiebaud (Britt Westbourne) responded, “Just listened to a few songs off of @kate_grahn new EP and the girl has big talent!! Congrats Kate and @NancyLeeGrahn Keep hustling and kicking through doors. I love your voice!”

Kate began work on Ragdoll shortly after her graduation from the Thorton School of Music at the University of Southern California.

According to her, Untangling addresses her confrontation with the mental health issues she faces, Obsessive-Compulsive Disorder and Tic Disease.

Nancy Lee Grahn is justifiably proud of her daughter Kate who obviously has a very bright future ahead of her.

Grahn’s character on the ABC sudser should have it so good! Alexis Davis is the wreaking ball of hot messes and at the present time she is thick in the middle of a nightmare.

She will soon have to go on trial for maiming Dante Falconeri (Dominic Zamprogna) with a syringe full of lidocaine. Staying sober is a constant battle and one of her daughter’s has just lost her father. Life is always a bowl full of cherries and fruit loops with Alexis who must have a gene that prevents her from learning from her mistakes.