General Hospital (GH) spoilers reveal Dr. Hamilton Finn (Michael Easton) was looking forward to his wedding day. He and his fiancé Anna Devane (Finola Hughes) were going to get married in a double wedding ceremony with Peter August (Wes Ramsey) and Maxie Jones (Kirsten Storms). However many dark secrets have taken a day that should have been happy and turned it into a tragedy. Anna was keeping secrets from Finn.

She knew that Peter was her twin sister Alex Devane Marick’s (Finola Hughes) son. She also knew that Peter committed different crimes. Anna did not turn to Finn for help. She turned to Valentin Cassadine (James Patrick Stuart). Finn was upset that Anna had not included him in the situation. Now Finn has turned away from Anna. It may be that he will not want to be with her again. If that is the case then Finn will need to move on.

Finn and Hayden (Rebecca Budig) were a happy couple at one time. They were going to get married. Hayden was pregnant with their daughter Violet Finn (Jophielle Love). Hayden got into some trouble and had to leave Port Charles. She told Finn that she lost their daughter. It was during that time that Finn turned to Anna.

She helped him to deal with the loss of Hayden and his daughter. However Hayden came back to PC. She told Finn the truth that his daughter was alive. Finn was happy to be a father. He spent time with Hayden and Violet while Anna was away. It was soon after Anna came back that Hayden had to leave Port Charles again. She thought her life was in danger. Finn and Violet have missed Hayden while she has been gone. Could Hayden come back to Port Charles to be with Finn and Violet?

Finn and Jackie (Kim Delaney) have a complex past. They had been together before she married his father Dr. Gregory Chase (Gregory Harrison). It was a one night stand but Finn felt guilty about it. He left and did not come back to his family. Jackie and Gregory had a happy life together and raised their son Harrison Chase (Josh Swickard). Jackie came to Port Charles on a story. She has reconnected with Finn and Chase. However Jackie and Gregory are having problems with their marriage. The secret that Jackie and Finn have could bring other problems. Finn might be Chase’s father instead of Gregory. Could the secret that Finn and Jackie have bring them together?

Finn and Alexis (Nancy Lee Grahn) had a short relationship. Finn was not currently with Anna. He was not sure if they would get back together. Alexis was a friend to Finn. They both are recovering addicts. Finn got involved with Alexis. They had a good connection. Alexis is currently struggling to overcome her addiction again. Could Alexis be the one to help Finn to get over Anna? Could Finn help Alexis get her life back on track? Could it lead to a long time love connection? 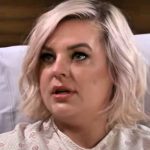 Finn and Portia (Brook Kerr) are both dedicated doctors. They both have daughter that they love. Finn and Portia have interacted on the job. Portia and her daughter Trina Robinson (Sidney Makayla) have had to deal with some complex issues in regards to Marcus Taggert (Real Andrews) and Cyrus Renault (Jeff Kober). Could Finn help Portia with her problems? Could it bring them together?

General Hospital’s Finn may be alone again. He loves his daughter. He wants Violet to be happy. He thought that he and Violet could be happy with Anna. He and Anna might be able to come back together. However if that does not happen then Finn will need to find a new love. Will he find it in a love from the past? Will he find love with someone new? Tune into General Hospital to find out who might help to mend Finn’s broken heart.