General Hospital (GH) spoilers reveal that Maurice Benard (Sonny Corinthos) dropped a huge State of Mind podcast tease this week. Who is his next guest on his YouTube vlog? Looks like it could maybe, possibly, be none other than GH alum Vanessa Marcil (Brenda Barrett).

Benard’s weekly show on his YouTube channel is called State of Mind. On it he addresses issues of mental health and several of his General Hospital co-stars have made appearances.

On Twitter Benard gave his followers a chance to guess who his next guest is with a throwback photo in which water pours down Sonny’s face and he’s in shock. 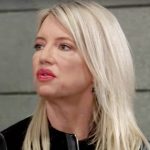 General Hospital spoilers: Who is Next on State of Mind?

Brenda and Sonny fans knew the specific scene Benard shared with a fan posting: “This is when Sonny saw his true love was alive as Amazing Grace played.”

Did Benard confirm that Vanessa Marcil is his next guest by retweeting a clip of the scene?

It could be argued that the biggest loves of Sonny’s life are his current wife Carly Corinthos (Laura Wright) and presumed dead Brenda.

Vanessa Marcil has not confirmed the possible reunion. She has however given her opinion on his hot new silver fox look by reposting a video that Maurice Benard shared and she captioned it, “This man @mauricebenard is one of the greatest loves of my life….But, why wasn’t he this hot when we were kids together? 🤷🏻‍♀‍” New episodes of State of Mind drop on Sundays.

In the meantime fans are speculating like mad over who finds amnesiac Sonny who is hanging out in a bar with a couple of Good Samaritans.

He has cleaned the place to within an inch of its life, cooked up great pasta, and single handedly taken down a robber. Yet no one, not even him, knows who the heck he is.

Will Nina Reeves (Cynthia Watros) be the one to discover he is alive and keep the secret from her tormentor Carly? Carly sure has a load of bad karma coming due! Not only is Nina gunning for her, but she’s also kidnapped Cyrus Renault’s (Jeff Kober) elderly mom from a nursing care home and is keeping her somewhere for “leverage.” The chickens are coming home to roost!