General Hospital Spoilers – Marcus Taggart Is Worried For His Daughter

Marcus Taggart, a detective after Sonny Corinthos (Maurice Benard) for many years before he joined the Drug Enforcement Agency as Jordan’s partner doesn’t think Jordan’s trying hard enough! Trina faces a lengthy prison sentence, a criminal record that will follow her around for years, and expulsion from Port Charles University for crimes she didn’t commit. Jordan didn’t have a lot of choices other than to go by the evidence and arrest Trina, even though that evidence was planted by Esme Prince (Avery Kristen Pohl)!

Taggart, like Trina’s mother Portia, is frustrated because Jordan seems to be taking the easy route and not trying to disprove that their daughter is guilty! No one involved in the case including Jordan thinks that Trina filmed Cameron Webber (William Lipton) and Josslyn Jacks (Eden McCoy) having sex and putting it on the internet.

General Hospital Updates – Trina Robinson’s Court Date Is Drawing Near, And Nothing Has Been Found That Will Clear Her

Trina’s court date is drawing near, and nothing has been found that will clear her, even though everyone believes she is innocent, although Spencer Cassadine (Nicholas Chavez) is playing detective. He believes his “awful girlfriend” as Portia recently called her is fully guilty of making the video, planting the phone in Trina’s purse, and calling the anonymous tip line fingering Trina! The only thing that might clear her is if he testified that she saw him in the Port Charles cemetery visiting his mother’s grave, but she doesn’t want to. Spencer was still technically serving his prison sentence at Spring Ridge at the time and Victor Cassadine (Charles Shaughnessy) had “arranged something” for him to make “a field trip”. Trina doesn’t want to admit she saw him even though it would be an alibi – it happened at the same time Esme uploaded the video.

Marcus can tell that Jordan and the Port Charles Police Department are overwhelmed with high-profile cases and rather short-staffed; one detective on suspension and the other overloaded. Maybe that’s why more manpower has been devoted to finding the real perpetrator, and Marcus wants to be reinstated so he can solve the case! Jordan and Curtis Ashford (Donnell Turner) fell apart because she didn’t want a layman helping, but Marcus will gladly come out of retirement to help his daughter!

But Jordan can’t let him help – he had been under house arrest and in her house during that time, she’d thrown him under the bus! Previous GH episodes revealed Jordan and Taggart were equally guilty while DEA partners in planting evidence to convict Cyrus Renault (Jeff Kober)! 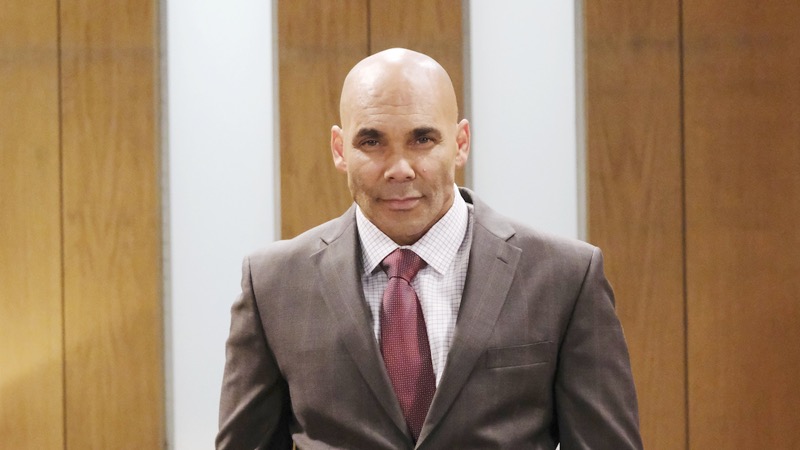 Portia walks in when Marcus is giving Jordan the third degree about not doing enough to find the real perpetrator and clear his daughter! Portia of course, feels the same frustration and fear, considering Trina’s court date is looming large, and he’s trying to talk Jordan into reinstating him to the force! Portia knows that he would do anything for his daughter and did, even to the point of breaking her heart by playing dead but that was for a good reason. That had also been Jordan’s idea to protect Renault from killing him or having killed for real because only the two of them were left alive from their team! Someone has to find evidence of the real perpetrator so Trina can be cleared, or she’ll be paying for someone else’s crimes for the rest of her young life!