General Hospital (GH) spoilers and updates tease that Avery Kristen Pohl’s new movie has started streaming and the actress is excited about it. Also known as Esme Prince on the daytime soap, the actress took to Instagram to share the good news.

Pohl shared a post on Instagram that her new movie, Sunset on the River Styx, is now available on streaming services. The movie stars Phillip Andre Botello and Jacqueline Jandrell. It follows the story of a pair of morose lovers who finds themselves spiraling down a surreal rabbit hole. Their past and future collide, plus they have to deal with a vampire death cult. Pohl takes on the role of Brit but the young actress didn’t reveal much about her character.

“This has been a project near and dear to my heart as I got to work with the wonderful Aaron Pagniano and a fantastic crew that feel like my older brothers and sisters!” the actress shared.

She’s excited to share their new film with everyone after several years of waiting. Sunset on the River Styx was filmed back in 2017. The movie is now available on Amazon, Vudu, and iTunes! 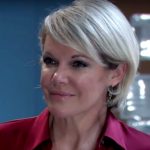 Pohl first appeared at General Hospital on August 16, 2021, but it wasn’t until August 19 when the name of her character was revealed. There’s been a lot of tension between Esme and Josslyn Jacks (Eden McCoy). Carly Corinthos (Laura Wright) will tell her to back off Esme and just let Spencer Cassadine (Nicholas Chavez) handle her.

Josslyn may have a hard time heeding Carly’s advice given that she’s convinced that Esme is just manipulating Spencer. She may want to continue keeping a close eye on Esme.

Trina Gets Drawn to Spencer

Trina Robinson (Sydney Mikayla) will be surprised by her feelings toward Spencer. She’s still furious at him but she also can’t deny the fact that she feels a strong tug toward him. Hope is not lost for these two as a couple in the future.

Britt Westbourne (Kelly Thiebaud) considers asking Jason Morgan (Steve Burton) for help in locating Liesl Obrecht (Kathleen Gati). It’s not something she wants to do but will have to if that’s what it takes to find Liesl. As for Jason, he’ll be in the hot seat as Sonny Corinthos (Maurice Benard) questions him about his true relationship with Carly.

General Hospital (GH) Spoilers: Esme Staying In PC, But Not Because Of Spencer