General Hospital spoilers and updates tease that William Lipton opened up about playing Cameron and talks about his character’s bad side.

In an interview with The Chat, the actor answered a few questions about his alter ego. The actor seemed to be excited when he was asked about the possibility of seeing Cameron’s bad side.

Lipton said that he definitely liked the idea. 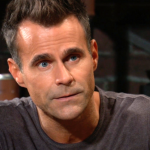 Will Cameron’s Past Push Him To The Dark Side?

Given his alter ego’s past, Lipton feels that it’ll be interesting to see if Cameron will just let loose his dark side or if he’ll really go full mob. His character has “been pretty unlucky” with his father figures. One died in a shootout and the other one left the family.

Lipton said Cameron had to overcome a lot of struggles before he found stability. When asked what could possibly set Cameron off and push him to the dark side, the actor answered that it may probably be triggered by the father he once had but left him and his family.

“I think by Cameron stepping down and making that ultimate decision to not end up like his father, he could be on more of a brighter path,” he said.

Cameron teased that he likes to play the darker side and he’ll “be smiling” if he gets a script with that kind of storyline.

Spoilers hint that Drew may be reactivated once again when he learns the truth about Louise August (London and Jett Prinzo-Berendt).

Victor Cassadine (Charles Shaughnessy) will do all he can to reactivate Drew, and Peter August (Wes Ramsey) seems to be eager to help him as long as he gives him what he wants – to be with his family.

If Drew finds out the truth and gets activated, he may deliver Louise to Peter. Will he manage to overcome the mind conditioning and protect Louise before he does something he’ll regret later on? Maybe his connection with Scout Cain (Ella Ramaceri) could help him resist mind control.