General Hospital spoilers indicated that fans may have been right all along when questioning Trina Robinson’s (Sydney Mikayla) paternity. Now Real Andrews, who has played Marcus Taggert for decades is asking fans the same question. Who Is Trina’s father? Is Portia Robinson (Brook Kerr) truly no better than Jordan Ashford (Briana Nicole Henry)?

General Hospital’s Portia has called out but Jordan and Marcus Taggert (currently Asante Jones) on their lies. However, it seems that Portia may have been lying just as long about something much more important. Portia was blatantly honest with Jordan about her affair with Curtis Ashford (Donnell Turner) years ago.

However, G.H. spoilers suggest that she left out a large portion of the truth. Fans remember that Jordan lied about T.J. Ashford’s (Tajh Bellows) paternity for years. Has Portia done the same with Trina? After all, Curtis asked if Trina was his daughter and Portia told him no. Did Portia lie? 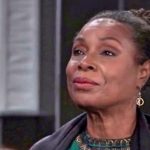 From the time General Hospital’s Portia has insisted that Trina be respectful of Curtis. Normally adults expect their children to be respectful but Portia takes this to the extreme. Trina has blamed Curtis for Taggert getting shot and for his supposed death months ago.

Now Trina knows that Taggert is alive and believes she should apologize. Portia has been pushing this for months claiming it was because Curtis saved her. However, is there more to the story? Does Portia believe Trina should respect Curtis because he is her father and not just a friend?

Since Real isn’t currently onscreen, he could simply be trying to keep General Hospital fans interested in the show and his eventual return. However, fans have questioned Trina’s paternity from the time her father was revealed. It would make perfect sense for Portia to have passed Curtis’ daughter off as Taggert’s. After all, Curtis broke things off as soon as he learned that Portia was married. Curtis didn’t hang around long enough to see if Portia was pregnant or anything else.

Curtis has no contact with Portia for years and Taggert was thrilled to have a daughter who worshipped the ground he walked on. However, fans have mentioned the possibility several times and Real could want fans’ honest opinion. Will Taggert lose his daughter to Curtis? How would Trina handle her life being turned upside down once again? Will Taggert ever forgive Portia if she has lied to him all these years? Can Trina and Curtis forgive her as well?