General Hospital (GH) spoilers reveal that Kim Delaney has taken on the role of Jackie Templeton in Port Charles. The character debuted with Demi Moore in the role but Kim has put her own unique spin on the character and made it her own.

The made for tv movie is based on a real life event. It follows the true story of Mari Gilbert, played by Delaney, whose daughter Shannan (Katharine Isabelle) goes missing. Sadly, a corpse is found and it’s discovered that the young woman was murdered.

Shannan’s death is attributed to possible drowning, but Mari does not believe this and fights to have the case re-opened. Eventually she is heard and the case is reopened as a murder case. Kim recently told reporters at a press conference for the film that she had to immerse herself in the story in order to do the tale justice. 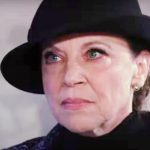 “It was [about] a mom losing everything,” she said. “That’s where I had to go. It was a very dark, deep place to go, because [my character] had already lost one daughter and then the other daughter, she’s lost in her own way.”

“It’s crazy how this happened to this one person [who] was trying to raise her kids,” Delaney says. Mari was determined to get justice for Shannan and unfortunately, she died in a tragic manner herself.

Former Today show host Deborah Norville executive produced the film and she was very familiar with the case after covering it for Inside Edition.

Norville said, “I always have had this frustration covering these kinds of stories that…we’re just not able to get to the nuance. These are families, these are lives, these are human beings…their lives have been upended in the most horrific and unthinkable way.”

“What I brought to [this role] from myself was a mom who will go to any length for their child,” Kim said. “[T]his was the mom who would not stop at anything…”

Kim’s character Jackie Templeton is also a fierce mom who is fighting for her son Harrison Chase (Josh Swickard) on GH.