General Hospital (GH) spoilers reveal that alum Kristen Alderson (Starr Manning and Kiki Jerome) shared a special memory with her fans on social media this weekend. The Daytime Emmy-winning actress also starred as Starr Manning on the ABC soap One Life to Live.

Most recently Alderson starred in Mélange, a Logo TV series that premiered last May. The show featured other former soap stars Morgan Fairchild and Robert Newman.

She posted a picture of a gorgeous yellow dollhouse on Insta with the caption: “Came across an old One Life to Live script from when Starr & Cole were talking about running away together for the last time. Because of this scene, fans sent Brandon Buddy & I a dollhouse that exactly fit their dream home.” 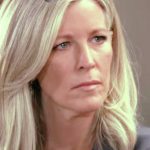 The script is also seen with the dollhouse which she cherishes to this day.

She continued, “It even has a backyard, a swing set, and a Starr, Cole, & Hope doll😭💙. I know you ‘Sole’ fans are out there who sent this. Just know how appreciative I am, and that I still have the house and always will.”

When OLTL was canceled, Alderson and costars Roger Howarth (Todd Manning) and Michael Easton (John McBain) made the transition to GH which is set in Port Charles, New York. Later the show lost the rights to their characters and they were assigned new roles. At that time the actress switched from playing Starr Manning to Kiki Jerome.

Until very recently Howarth portrayed Franco Baldwin and today Easton portrays Hamilton Finn. Despite Franco’s death Howarth has assured fans that he will return to the show. This has led to speculation that Alderson might rejoin the soap.

This weekend Alderson tweeted out a sweet message to her former OLTL on-screen mom, Kassie DePaiva (Blair Manning). She wished her a happy birthday and shared a picture of the two of them when they were still on OLTL.

Alderson wrote, “!! Love this picture of us on set years ago. Missing you & the other world we got to live in together.”

On GH Kiki was killed by Ryan Chamberlain (Jon Lindstrom) with the actress Hayley Erin in the role. But fans would love to see Starr return and some think that Cole and their daughter Hope are still alive!