ABC General Hospital spoilers tease that Emme Rylan (Lulu Spencer) is truly, madly, deeply in love with her guy, and she’s not ashamed to show it! Her partner Don Money is celebrating a birthday and Emme posted the sweetest, gushiest post about him in celebration.

This is her caption that accompanies a smoldering hot pic of her man: “For @dmoney596’s birthday I usually post a picture of him being the amazing Dad that he is! Not this time! This birthday I’m going with a picture of just how HOT you are Don! Happy Birthday! You’re the hottest Dad out there! We love you so much!! #happybirthdaystud.” Yowza!

General Hospital spoilers – Emme Rylan’s partner has something to celebrate

Emme is not exaggerating, Don is seriously sexy and his pic could ignite petrified wood. Emme shared a photo of Don with his hair slicked back and his shirt unbuttoned down to there. Her fans were totally in tune with her sentiment and gave Don many congratulations on his big day. 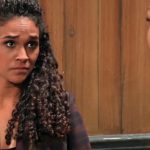 General Hospital spoilers – What happens next to Lulu Spencer in Port Charles?

Speculation started to grow days ago that both Emme and William deVry (Julian Jerome) had been let go from the ABC sudser. Fans were stunned and dismayed and vocalized long and loud on social media. William finally addressed the rumor last week when he posted a pic of himself at the studio gate and said his goodbye to fans.

In the beginning Emme was also silent but told fans that she and her family had packed their stuff and were planning a road trip—not the kind of thing one does while working 40-plus hours a week. She has since spoken about the rumor and it is clear her character is leaving the show.

That’s because Lulu was seriously injured in an explosion set, ironically enough, by Julian. Julian skated harm-free but poor Lulu has a severe head injury and is in a coma. Her loved ones have been told it doesn’t look good and explosive show spoilers reveal that her mom Laura Spencer (Genie Francis) and ex husband Dante Falconeri (Dominic Zamprogna) will bicker about what to do next in terms of care.

What do you think GH fans, was it necessary to get rid of these two fan fave characters, especially now that Dante is back in Port Chuck?