ABC General Hospital spoilers tease that heartthrob Steve Burton (Jason Morgan) is stoking fan excitement by talking up the reunion of Port Chuck, the band he formed with GH costars.

Steve sent fans into a tailspin recently by announcing on social media that he was saying goodbye to Port Chuck, the nickname of GH’s fictional setting, Port Charles, New York.

Could viewers endure a second departure of Stone Cold from the ABC sudser? Luckily they didn’t have to find out as Steve later clarified he was talking about the band and not his role on the show.

He announced that the band was no more after a year of not touring, and with the coronavirus decimating live events. And then, the tide turned! He later declared that Port Chuck was reuniting for a one-time virtual performance.

He just posted a black and white photo on his Insta with the caption “One of my favorite pics from the PORT CHUCK days! Looking forward to singing with these dudes again! Join us 10/24 online .. check out stonecoldandthejackal.com for details.” 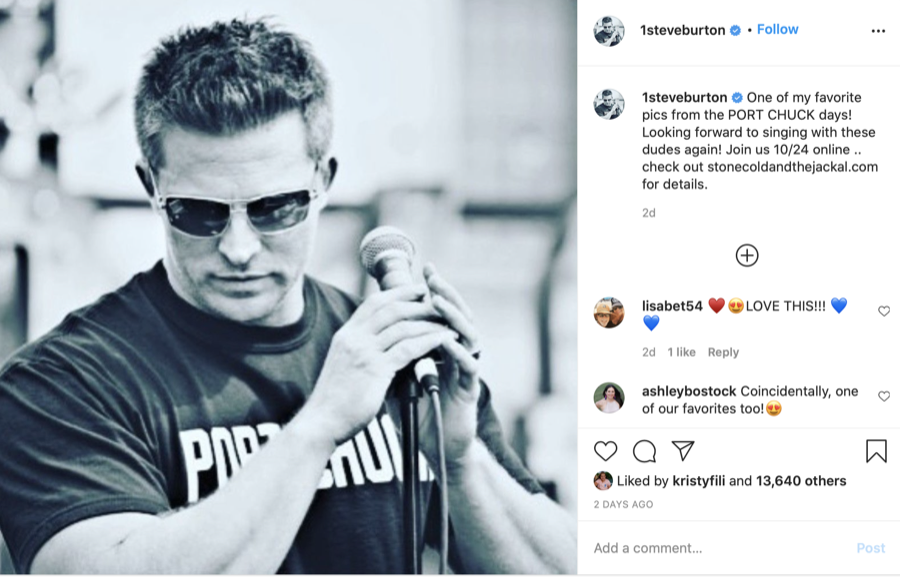 General Hospital spoilers – Will you be watching Port Chuck perform in a one-off?

The photo Steve posted is a stunning black and white pic of himself in dark shades and flawless hair. He is clutching a microphone while wearing a t-shirt that shows off his muscular physique to perfection.

That pic earned him plenty of heart emojis and a ton of happy face emojis—obviously, fans are as excited as he is for the upcoming performance. One fan posted, “Steve Saw you & the guys several times at Uncle Vinnie’s in Pt Pleasant w/my sister great times so much fun!”

General Hospital spoilers – What is next for Jason Morgan in Port Charles?

Luckily Steve Burton decided to keep his day job because fans are addicted to his character Stone Cold. What’s next for the brooding leather-clad hunk? He has his hands full with a mob war about to break out and viewers are wondering about the future of JaSam. Was it just us or was there some serious heat in the room when Britt Westbourne (Kelly Thiebaud) she told him to, “drop trou,” during her medical exam?