ABC General Hospital spoilers tease that Scarlett Fernandez (Charlotte Cassadine) has just welcomed a new addition to her family and it is the cutest little pup you may have ever seen!

She posted a pic of her new pooch on Insta with the caption, “I became a new puppy owner right before #nationaldogday I call that perfect timing!! #puppy 💗.”

It is indeed perfect timing as all of the shelters have been encouraging responsible pet owners to clear the shelters in August. The coronavirus pandemic has seen record numbers of pet adoptions as owners want to share the love and give a deserving animal a new home.
It looks like Scarlett got the message, too!

The pic she shared shows her cradling her new little one in her arms. She has a cute smile on her face as her puppy also stares at the camera with a very contented look on his face. He is a bundle of soft brown fur and floppy ears and he has light brown eyes to match. 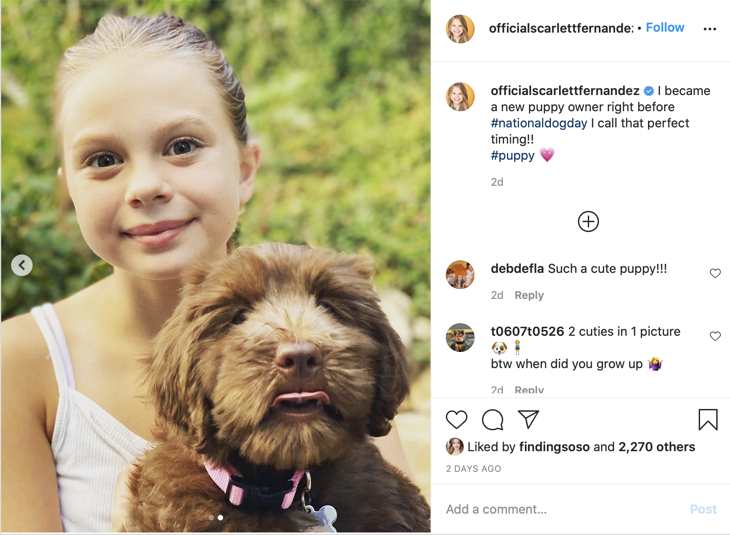 Scarlett’s fans were quick to congratulate her and note how terribly cute her new friend is. One fan asked what the little dog’s name is so we will stay tuned to see if Scarlett shares that info—maybe she hasn’t named him yet!

One fan posted, “2 cuties in 1 picture 🐶🧍‍♀‍ btw when did you grow up 🤷‍♀‍.” It sure does seem that time has flown by. When Scarlett first came on as Charlotte Cassadine she was a little girl but now it’s clear that she is blossoming into a talented and adorable young lady.

General Hospital spoilers – What is next for Charlotte Cassadine in Port Charles?

We haven’t seen Charlotte Cassadine lately in Port Charles, but she has had a bit of drama in her life to this point. That is to be expected as the daughter of a Cassadine whether Valentin Cassadine (James Patrick Stuart) is actually a DNA Cassadine or not.

We have no doubt that her life will be turned upside down, along with half of the town when her mom’s ex returns. Dante Falconeri (Dominic Zamprogna) returns soon after being told by the WSB that the town needs him to be a hero. How will unpredictable Scarlett react to the shocking news?
Be sure to catch up on everything happening with GH right now. Come back here often for General Hospital spoilers, news, and updates.