General Hospital spoilers – Maurice Benard talked to Réal Andrews for his YouTube show State of Mind
On Sunday Daytime Emmy winner Benard went on Instagram to preview the conversation they had. He captioned his post, “BIG BOYS DO CRY. If you’re in the mood to watch 2 men talk about the mistakes they’ve made. And how we can improve as fathers, husbands, and basically human beings.”

GH fans loved the post with one saying, “GOD BLESS YOU MAURICE! THANK YOU FOR YOUR BEAUTIFUL WORDS OF ENCOURAGEMENT! 💕💕💕💕💕🙏🙏🙏🙏.”

Another fan wrote, “God I love you and your candor and vulnerability.❤️,” while one fan posted, “Great man and very wise.” 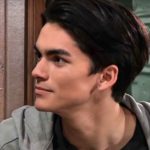 General Hospital Spoilers – What Is Next For Sonny Corinthos In Port Charles?

Maurice has been a vocal mental health advocate for many years and through his portrayal as Sonny Corinthos and with his real life talks, he has helped millions of grateful fans.

Right now his character Sonny Corinthos is in a heck of a situation with Andrews’ Marcus Taggert. Both are pulling a con in which everyone in town thinks Taggert is dead. But day by day it seems that one more person finds out the truth and of course it is only a matter of time before the scam is blown wide open.

General Hospital Spoilers – What Is Next For Marcus Taggert In Port Charles?

Taggert is undercover so that he can help bring down the town mob boss Cyrus Renault (Jeff Kober) who is running drugs through town. This has made Taggert and Sonny an odd partnership. Historically they have been on opposite sides of the law but now they are united in their effort to get rid of smarmy Cyrus.
This unfamiliar union has made for entertaining viewing as Sonny and Taggert go back and forth about the latter routinely coming out of hiding. Sonny has him holed up in a house near his but Taggert just can’t seem to stay put. How will this fall out in the end?

Will Taggert and Sonny continue to be “friends” or will they revert to their old ways once the current plot is over?