General Hospital spoilers – Rick Springfield has a new book out

Magnificent Vibration will debut in January as an Audible original. Once again the protagonist is Bobby Cotton who, in the prequel, connects with God through a self-help book and a 1-800 number. This revelation leads him on a spiritual journey with his bride and travel companion Alice Young.

In World on Fire both Bobby and Alice are looking for salvation while a global pandemic is decimating the world’s population. Unexpectedly things change up when the couple find out that their newborn daughter has amazing abilities. Soon, the fate of the Earth is in danger as aliens watch and close in. 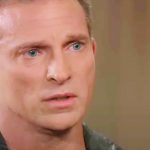 Springfield had this to say his book: “Houston, we have a problem! Pandemic. Fires. Hurricanes. Isolation. TV re-runs. The end seems near. I love our planet, as we all do, and the destruction we’re bringing to her door is frightening. I really want to change the ending. Then, I realized that I could, IN FICTION, because…well…its fiction. So I wrote a novel about it and gave our planet a happier resolution. Of sorts.”

He continued: “6 years in the making!!! The sequel to my first novel Magnificent Vibration. Apparently, Horatio Cotton and (ex-nun) Sister Alice Young did the ‘deed’ because there is a plague afoot. This novel was begun way before COVID but finished during the lockdown which made it especially bizarre to me. Hopefully, it provides some needed laughs, a few tears, and a conclusion of sorts.”

World on Fire will be released on Audible on January 28 and preorders are available now.

In addition to Magnificent Vibrations, Springfield wrote his 2010 best-selling memoir titled Late, Late at Night. World on Fire is released at the same time as the 40th anniversary of Springfield’s fourth studio album, Working Class Dog. The record was released by RCA Records in 1981 and features his break-out hit and Grammy-winning single “Jessie’s Girl” which GH fans remember with fondness.