ABC General Hospital spoilers reveal that the show’s Los Angeles based alum Tequan Richmond (TJ Ashford) has been tapped to star in a new TV One production.

The former Port Charles, NY regular will appear in Blood on Her Badge on November 16, 2020. The project is described as a suspense-drama film that is inspired by true life events.

The suspenseful movie centers on a tragic and failed romance and in addition to Richmond the film stars Rayven Ferrell, Miguel Nunez, Tetona Jackson, and Johnell Young.

The new movie Blood on Her Badge reveals a true-crime story about an eager new cop named Dee Johnson. Dee is getting adjusted to her exciting career when she falls head over heels for a charming younger man. 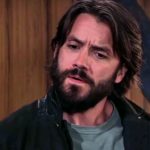 The younger man may not be who he appears to be and she gets more and more involved with him, combining her professional and personal lives. Dee begins to make iffy judgements that will ultimately cause her to risk all sense of objectivity. Eventually Dee loses her moral compass as her lover begins to pull her strings. The manipulations Dee experiences will lead to tragic consequences.

The movie was written by Scott Mullen and directed by Kenn Michael.

Richmond was born on October 30, 1992 and he is known in his music career as T-Rich. His credits include the role of Drew Rock on the UPN/CW sitcom Everybody Hates Chris. He also played Ray Charles Jr. in the motion picture Ray.

When he departed GH the role of TJ Ashford was recast with Tajh Bellow.

General Hospital Spoilers – What Happens Next To TJ Ashford In Port Charles?

TJ Ashford has been front and center recently and most of it has to do with town villain Cyrus Renault (Jeff Kober). TJ is the son of PCPD police commissioner Jordan Ashford (Briana Nicole Henry) and as such he is a target of the man blackmailing her. Unbeknownst to him Cyrus was the one who kidnapped him this summer and had him beaten and bloodied.

TJ wants to hold a protest against Cyrus and the way he is running General Hospital but his mom knows this is a terrible idea. She has vetoed his application for a protest and seems to have taken matters into her own hands with Portia Robinson (Brooke Kerr).