General Hospital (GH) spoilers indicate that Steve Burton (Jason Morgan) recently spoke in an interview about his former onscreen grandmother Lila Morgan Quartermaine. Lila was played by the legendary Anna Lee. Steve remembers how the stage would be cleared for her entrance, here’s why.

General Hospital’s Leslie Charleston, who plays Jason’s mother Monica Quartermaine, remembers almost being killed by Lee’s power wheelchair. In a recent conversation, Leslie and Steve were discussing how the stage would be cleared before Anna arrived. Fans may think this was a bit much for a soap actress but the clearance was a safety necessity. Anna used a power wheelchair onset that was different than her chair at home. 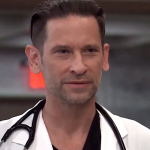 Unfortunately, Anna got the controls confused and often ran into things. It seems that Leslie was almost a casualty at one point. After that incident and bumping into the furniture on set, it was much easier, and safer to simply clear the stage when Anna approached. Finally, the crew decided to announce Anna’s arrival so everyone would leave the set until she was in her spot.

GH Spoilers: Teasing Anna Was A Must

General Hospital’s Burton jokes about everyone teasing Anna once she got on set. Steve says that Anna would bump into furniture and things and after she got settled they would tease her. Anna would just laugh when they asked if she had been drinking or something. Steve says Anna would reply, “actually, yes, I am trying to put on weight so I have Guinness and crackers every day.” That was a day on the set and like being part of a real family.

General Hospital’s Anna Lee passed away at 91 from pneumonia. However, Anna acted in a wheelchair for over twenty years after becoming paralyzed just a year after joining the show. Anna was in a tragic car accident that left her paralyzed but she had no intention of giving up acting. Anna’s acting career spanned 70 years. Anna was born in England and studied acting in London before moving to California. Anna’s breakthrough role was in How Green Was My Valley. Including The Sound of Music, Fort Apache, and King Solomon’s Mines, Lee appeared in over 60 movies and television shows. Among other awards, Anna received the Lifetime Achievement Award at the Daytime Emmys in 2004.

Anna described Lila Quartermaine as, “the only nice person in the family. Lila’s the only one who has a calm, peaceful quality about her.” Anna was loved by everyone with whom she worked with on set.